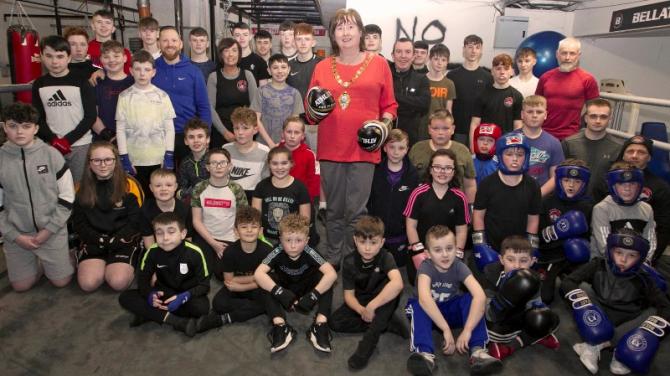 BRAID ABC is fighting back against growing mental health issues by offering a ‘safe place’ for people of all ages to take up the sport or simply focus on feeling stronger.

And this Saturday night they are hosting a fight night in Tullyglass House Hotel in Ballymena, giving its members the chance to o showcase their skills - and sending the message that they are well and truly back in business.

Mayor of Mid and East Antrim, Cllr Maureen Morrow, joined some of the young boxers at their IMMA Gym base in Ballymena to help launch their event.

“I was delighted to give my support to Braid Boxing Club as they make the final preparations for their exhibition night”, The Mayor said.

“The work being done by all the coaches, members and volunteers to encourage people of all ages to open up about their mental health and use physical activity to improve their overall wellbeing, is worthy of high praise.

“Having seen the skills and sportsmanship on display by the young members of the club, I know that anyone who is planning to attend the exhibition night is in for a real treat!”

It has been operating from the IMMA Gym at George Street in Ballymena since May 2019 and runs training sessions on Monday, Wednesday and Friday evenings.

Saturday evening’s fight night sees the doors pen at 6pm, with the first fight at 6.30pm.

Last week we previewed the big fight night which will see the best local lads in action against top opponents from across the water.