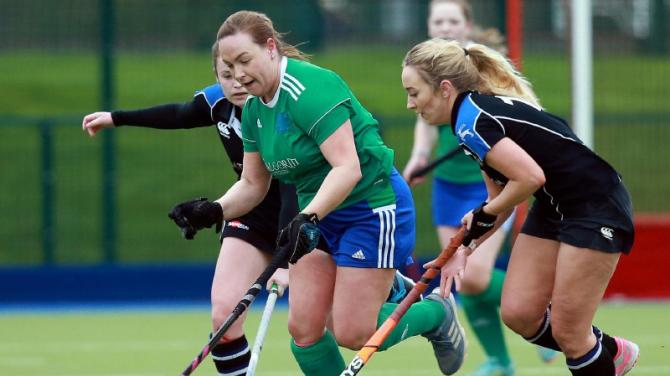 BALLYMENA Ladies First XI started off the first quarter the better of the two sides pressing CI’s defence and creating numerous chances in front of goal.

But the CI keeper kept her team in the game with some very good saves.

An effort from Jill Carmichael was cleared off the line and a later controversial back stick stop denied a superb cross from Aimee Logan for Kirsten Young to deflect.

It was only when Emma Gillespie struck the ball at force that the keeper made an excellent save but cleared only for Beth McFerran to slot home the rebound making it a well deserved 1-0 to Ballymena.

The second quarter saw CI react to the pressure they were under and had their own bit of the action at the other circle.

But Joanne Logan’s back four were on top form and soaked up the pressure and cleared their lines well.

A penalty corner awarded to CI was the only way they could score past the defence of Morrison, McCready, McBurney, Steele and Harbinson.

A first strike initially saved by Logan and cleared to the edge of the circle where a CI player found the ball and took a second stab at goal making it 1-1 at half time.

It stayed 1-1 for a long time with both teams creating chances but it came down to who wanted the three points the most.

A ball from Steele to McFerran in midfield to run the curve past two CI defenders along the back line slipped the ball to Clare Gillespie who was on the centre flick spot to fire the ball home to make it 2-1 to Ballymena and a well deserved three points.

After a series of away matches, Ballymena welcomed Lisnagarvey.

Ballymena struggled to find their way into the game and conceded two early goals in the first quarter.

After a break at the quarter Ballymena were determined not to concede again and started to attack.

Unfortunately it just wasn’t to be Ballymena’s day with the final result finishing 2-0.

Thanks to Trevor for umpiring.

BALLYMENA 3s travelled to Saintfield for a late start time in very blustery and rainy weather.

But they were denied an early goal by the Saintfield goalie who made a number of good saves.

Ballymena midfielders Jess Duncan, Jenny Sutherland and Amy Gregg worked tirelessly to keep the pressure on Saintfield and continued to create further goal scoring chances with some great link up play with the forwards.

However despite having plenty of possession in the first half Ballymena were unable to find that important first goal.

In the second half Ballymena again came out strong from the first whistle.

This resulted in Gillian Kennedy sweeping the ball into the net in the first couple of minutes to put Ballymena in the lead.

Saintfield reacted well however and with some good passing play Ballymena defenders found themselves much busier than in the first half with Emma Clarke having to make some excellent tackles to break down play and win back possession.

Saintfield won a penalty corner at the end of the third quarter and unfortunately the Saintfield strike was deflected off a Ballymena player into the net making the score 1-1 going into the final quarter.

Ballymena quickly fought back to regain the lead once again.

The winning goal was scored by Courtney Henry off a rebound to secure Ballymena a vital 3 points.