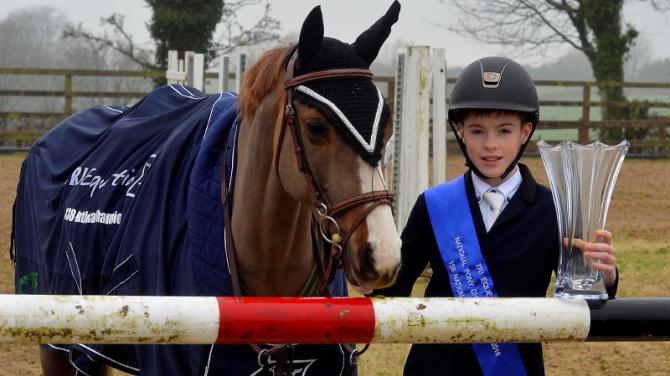 He was crowned National 138cms Champion at the Pony Championships in Mullingar.

Oliver was the leading rider in his category over the four days - a remarkable achievement as he was in against the best ponies and riders from all over Ireland.

Oliver qualified both his ponies for the Royal Dublin Horse Show.

Each athlete can only take ride one pony in each class.

He finished 4th on the second day with ‘Springhill Copper Beech’.

Meanwhile, next month (February 15) he is back in the saddle at Portmore Equestrian Centre in the Ulster Region Spring Tour, which is sponsored by Tri Equestrian Supplies.

And on February 29 Oliver switches his attention to the National Spring Tour at Ard Chuain Equestrian Centre at Ballina.

This tour is sponsored by EqijumpLtd.

The St. Louis pupil is a Showjumping Ireland athlete.

After the Spring Tours the talented teen will bid to qualify his 138 Grand Prix ponies for the Royal Dublin Horse Show in April.

The Parade Road lad thanks his parents for their very valuable support.

“Without them I would not be able to compete at this level,” he concluded.