Ethan is Young Sailor of the Year! 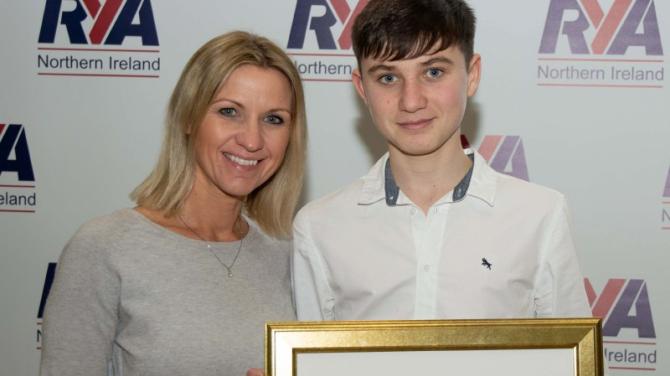 LOCAL lad Ethan McCormac has been named Young Sailor of the Year.

The Ballymena Academy pupil is a member of Cushendall Sailing and Boating Club.

In the Autumn, Ethan moved to the Laser 4.7 Class and is part of RYANI’s 2020 Youth Performance Programme, with ambitions to compete in the 4.7 worlds in Arco, Italy.

Ethan was one of many from across the Province who was recognised at RYANI’s Annual Awards night.

The awards, which celebrate the successes and people involved across recreational and competitive boating, took place at Riddel Hall in Stranmillis.

This year the prestigious awards were sponsored by Garden Rooms NI, Carrick Marine and White Noise.

Around 100 people attended the awards, which are a key event in the sailing calendar each year.

Speaking about the awards, RYANI’s Chair Jackie Patton recognised the vital importance of volunteers, shining a light on the impact of those who had been nominated.

She said: “Volunteers are the bedrock of our sport and without them it simply would not be viable. They give up their evenings, weekends and spare time to make sure that sailing and boating thrives in Northern Ireland and at RYANI we could not be more proud of their achievements.”

She also talked about the success of Northern Ireland sailors throughout 2019. “We have had a thrilling year of sailing and boating – our sailors really give it their all throughout the year and their hard work is paying off,” she added.

Michael Ferguson, from Ballyholme Yacht Club, was guest speaker and gave an inspirational talk on the night. He discussed his extensive experience of sailing including competing in four Fastnet races, two Round Britain and Ireland races on International Monohull Open Class Association (IMOCA), and skippering two IMOCA delivery transatlantics.

Across the awards categories, there were many inspirational stories of the volunteers who keep the sport alive and those who achieved major success in 2019.