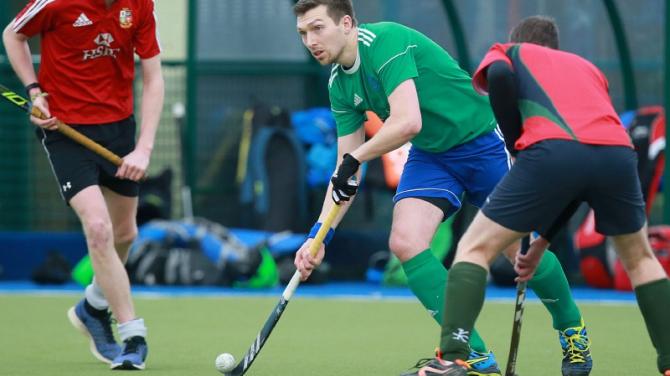 BALLYMENA men returned to action on Saturday after an extended break with a home fixture against NICS.

Despite notable changes in the starting line-up, Ballymena settled into the game quickly with Jess and McDonald finding plenty of joy as they picked out passes building play from the right.

Within minutes, good work from Archer secured the first penalty corner for the home side. An initial effort from Murphy found the keepers pads, but the rebound fell to the lurking Lorimer who made no mistake in finding the bottom corner.

The home side continued to distribute the ball sharply across the pitch and were unfortunate not to add to their early lead with further penalty corner opportunities well dealt with by the visiting defence.

Ballymena were dealt a blow when Phil Montgomery had to step off with a knock to the knee.

NICS began to find their range with a number of long balls creating dangerous chances, but an in-form Matt Orr, in the Ballymena goal, was sharp off his line to ensure the scoreline remained 1-0 to the home side through to half-time.

Shortly into the second half, after a good spell of Ballymena pressure, a pinpoint Dave Bradley ball, crashed into the circle, allowed Murphy to apply a smart deflection and double the Braid mens advantage.

NICS quickly responded and the deficit was reduced after the visiting front line were afforded to much space and a numerical advantage left Orr eventually beaten.

With the visitors searching for an equaliser a quick counter attack from Ballymena, built upon some good work from Jacob Bradley on the right, culminated in a further short corner. Lorimer's straight strike was stopped on the line with a foot, resulting in a penalty stroke, which Archer duely rifled past the Service keeper to push the scoreline to 3-1 in Ballymena's favour.

Service continued to work tirelessly to force their way back into contention and their efforts were rewarded with a further strike just minutes from time.

But Ballymena held on to mark their return to action with a win, final score 3-2. Ballymena would like to thank J Logan for umpiring.

BALLYMENA Ladies First XI played out a 1-1 draw at home to Priorians at the weekend.

The match began with high intensity that resulted in Priorians scoring the opener in the first quarter.

Ballymena were soon back in it and after dominating the second quarter, Ellen King scored the equaliser from a penalty corner just before half time.

The second half was very even and well fought between both sides.

Beth McFerran received the only card of the match after her first stick tackle of the game.

And Grace McBurney suffered a ball to the back to win the free out.

After withstanding a large amount of pressure in the final quarter, Ballymena lead a quick counterattack with Kirsten Young playing in Beth McFerran with one minute to go.

Ballymena 2s travelled to NICS in their league fixture this week.

The visitors started strong putting pressure on the NICS defence, and within the first quarter went 1-0 up with and goal from Lyndsey McClintock.

In the second half NICS created chances which were all cleared by the Ballymena defence.

The final score was 1-0 to Ballymena.

It was a hard fought battle for Ballymena on Saturday against Priorians 2s in the third round of the Cup.

They started off strong, applying a lot of pressure within the attacking circle.

There was great link up play between Emma Clarke, Natalie Sye and Amy Gregg in an attempt to get an early goal.

The Ballymena defenders were put under little pressure in the second quarter until Priorians received a penalty stroke which resulted in a goal.

The half time score was 1-0 which left Ballymena wanting more.

There was some more fantastic play by Emily McNeill, Lorna Murphy and Susie Keates

Unfortunately things were not going their way as Priorians scored another four goals.

A frustrating match to watch and play in but plenty of positives to take away.