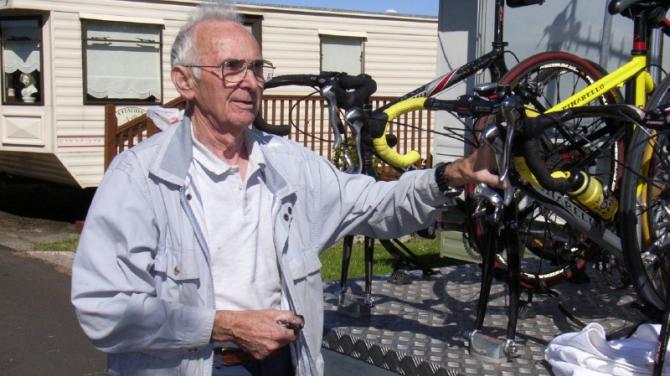 Rex passed away in Antrim Area Hospital after a short illness; he was just two weeks shy of his 89th birthday.

Rex Bonar was an enthusiast and always applied his bountiful resources to the maximum, no matter what the project, be it in his personal life, business or sport.

He was born on 31st January 1931 at 112 Larne Road in Ballymena and he never moved far from his home town.

We at Ballymena Road Club always knew Rex as a keen cyclist and one who was happiest when he was able to pass on his love for the sport by encouraging others.

He was originally a member of the Old Bleach cycling club in Randalstown and pride of place amongst his collection of trophies and awards is a certificate dated 4th July 1954 which confirmed he had established a club record time of 3 hours 32 minutes for a time trial race from Randalstown to Portrush.

Ballymena Road Club was founded in 1954 and shortly after its formation Rex joined its ranks.

Also in 1954 Rex established his highly successful business ‘A. Bonar and company electrical contractors’ The company was initially based at 112 Larne Road, before moving to High Street in the town and then later on to Pennybridge Industrial Estate, where it is still located.

The next major milestone in Rex’s life came on 25th March 1955 when he married Maisie. They were a perfect combination and Maisie became as familiar a face around the club over the years as Rex.

In fact Maisie worked so hard for the Road Club that, in 2007, she was awarded the club’s “Friendship cup” as club person of the year. Rex had won this same trophy in 1995.

Rex was also involved in other sporting clubs in the Borough and beyond.

In November 1969 he, and four others, set about forming Ballymena Amateur Swimming Club.

One of the other four founders was Billy Jebb, who went on to become Chairman of Ballymena Road Club, where he served alongside Rex on the club committee.

The swimming club held its first gala in 1970. Rex’s daughter Sally and son Alex were both swimmers with the BASC and both represented NI in the sport. They, and eldest sister Anne, both recall their mum preparing copious amounts of sandwiches, for the post gala refreshments and also packing fellow swimmers into the Bonar and Co crew bus to travel to galas all over NI.

Rex was an accomplished diver and was a one time member of Portstewart sub aqua club. He also enjoyed life above the surface of the water and was a member of Newferry water ski club.

He also took up snow skiing relatively late in life, when in his fifties.

Rex’s business interests earned him a place on the Ballymena Technical College board of governors. Many of the tech’s students would have gone on to serve their apprenticeships with A Bonar and co.

Rex was always ahead of the competition and he had numerous firsts attributed to him over the years.

In the 1960's Ballymena Road Club became the first cycling club in Northern Ireland to have a "title" sponsor when Bonar electrical became the club's main financial supporter. The company continues to sponsor the Road Club.

Many years later Rex's  efforts as “project co-ordinator” for the Road Club’s funding applications to the NI sports council and the National lottery, culminated in the club being successful recipients of a grant to help with their club house and events vehicle projects.

During the course of the work Rex actually partly funded the scheme with his own finance until the grant money was received.

In 1996 Rex’s vision of the club’s development plans came to fruition with the official opening of their customised premises at Railway Street in the town. Premises which the club members appropriately called ‘Rex Bonar house’ in honour of the man whose encouragement and business acumen made it all possible. Ballymena RC was the first cycling club to receive lottery funding for such a project.

In the early 1990’s Rex was the first of the road club’s officers to make use of a personal computer, I think mainly because hand writing had become such a difficult chore for him. At every opportunity club officials were handed out neatly typed notes detailing Rex’s next scheme or updates on progress of current schemes.

Ballymena Borough Council recognised Rex’s contribution when he was presented with the prestigious “Services to sport” award for 2006, at a gala dinner in the Des Allen suite at the showgrounds.

He was guest of honour at the Road Club’s annual dinner and prize presentation in 2008.

Rex also worked extensively with the youth members of the club after the opening of the new Railway Street HQ.

There were weekly circuit training classes, on Mondays and Wednesday evenings, lectures on health and fitness, first aid, diet, bike maintenance, road safety and so on.

When the weather was favourable Rex had the youths participating in mountain biking at Tardree forest and apparently taught them the words to “take me home country roads” as they cycled along.

The young people brought a great vibrancy to the Monday night club meetings, even if some of the old hands thought them a bit rowdy at times.

Trips to the Kerry youth tour and to the National cycling centre at Manchester velodrome were an annual event for Rex’s youths for a good number of years, until age caught up with him.

My personal memories of Rex Bonar will be of an erudite man with a keen, knowledgeable interest in world affairs and one with an acute sense of honesty and fair play. He could be sharp at times, even abrasive, but that was more borne out of his own striving for perfection, rather than any perceived failing on the part of the person to whom he was addressing.

He had an uncanny knack in being able to bring out the best from those of us fortunate enough to have served alongside him on the club’s management committee. He was a very difficult man to say “no” to.

His most tangible legacy to the club is, of course, the premises “Rex Bonar House” but for those of us who knew him best it is his example and motivational skills which will remain with us.

The last word goes to one of the youths whom Rex had encouraged.

“What I liked most of all about Rex was how he was 100% tuned into what you were saying to him. He listened and made a big deal out of anything you were doing, no matter how big or how small, he made you feel important.”

The Road Club extends their sincere sympathy to Rex’s children; Anne, Sally and Alex and to the wider family circle at this sad time.