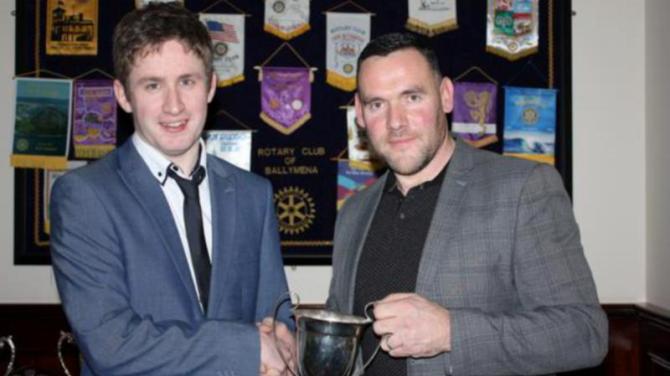 The members and friends were welcomed by Vice Chairman Martin Graham, visitors were present from Doagh & District, Randalstown, Ballymoney, Cullybackey and Kells & District.

Blair & Rankin dominated the seasons racing especially in the young birds and take Highest Prize-winner for the second time, the previous occasion being in 2015 season.

Highlight of a very successful season was winning the premier NIPA Talbenny YB National from South Wales with his Blue w/f (h) “Champion Faith”for which he collected the McKeown Cup at NIPA Ladies Night.

In Section B J Eagleson & Sons had NIPA Champion Old Bird 2019, and Blair & Rankin won NIPA Champion Young Bird 2019. Martin Graham won an INFC Kings Cup Merit Award for a bird scoring twice, his Blue cock was 59th Open in 2018 and 122nd Open in 2019, only bird in the MAC and Blair & Rankin had 1st MAC in the INFC Sennen Cove Ylr Nat and also topped the MAC in the Talbenny YB Nat and the Area (1) YB Liberation from Mullingar. The ever consistent W & J Smyth scored well again in the old birds topping the NIPA Sect B in Roscrea and Fermoy, they also won Talbenny and old time favourite Penzance.

The Ballymena cups and trophies were presented by Robert Turkington from Doagh & Dist, D & R Turkington won a Merit Award in the Kings Cup St Allouestre, their Champion “Bertie’s Boy” was bred by Blair & Rankin. Martin Graham also won a Kings Cup Merit Award. Robert is involved in the Doagh Centre and gives a very good hard at the Muckamore Station in the INFC events. The NIPA Sect B Diplomas were presented by the Ahoghill Centre Manager Jackie Steele from Rasharkin.

INFC prizes – Blair & Rankin, Martin Graham, Billy Ramsey and George Bell. Some £320 was paid out in Show Specials divided between Blair & Rankin, R Service & Son, W & W Gilbert and G & A Eagleson. Local builder David Parker sponsored the NIPA Old Bird season to the tune of £150, this was divided between J Eagleson & Sons, W & J Smyth, Blair & Rankin and R Service & Son. Thanks to Willy Gilbert and Mervyn Eagleson who supplied details of the above, greatly appreciated. Thanks as well to all the members and friends who assisted with the presentation and to Martin Graham who arranged the event.

For the major race from St Malo in France only a handful of birds and for the second season on the trot nil return for Ballymena & District, former members Mr & Mrs Sempey won 1st Sect B and 2nd Open NIPA and Hugh Boyd took 1st in the Mid Antrim Combine.

R Service & Son won - Old Bird League, 2nd YB Race. The presentation next year will include a new award, Smyth Bros Memorial Cup, the competition to be decided at the clubs AGM.

The Ballymena & District AGM will be on Monday 3rd February at 8.00pm in the clubrooms, any Resolutions to the Secretary Willie Reynolds in writing on or before Saturday 25th January, and any resignations.