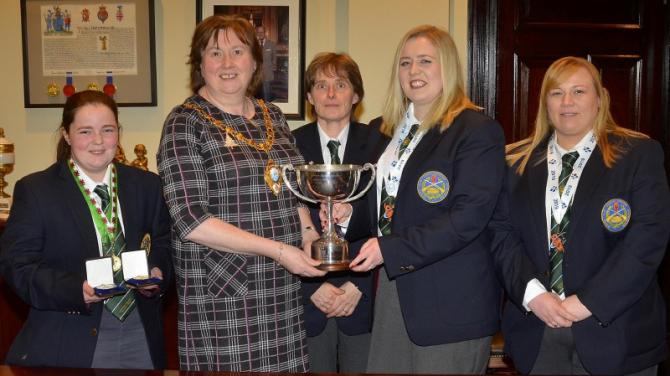 The evening was hosted by Mid and East Antrim Mayor, Councillor Maureen Morrow.

And in the process they collected quite a few medals and silverware.

The Thatch Ladies were especially successful.

They made up the entire Ladies ABT team which won the Ladies team trophy.

The team was made up of Lauren Coulter, Kirsty Hegarty and her mum Sandra Barr.

Lauren was also, along with Steph Porter, part of the Ladies DTL team which took silver at the European DTL event.

She added these to her World Cup silver medal and Olympic Quota place win for team GB in Qatar last April.

The Barr family had further success at the ABT Home International when Clifford won the Northern Ireland High Gun and was also part of the Veteran Team which took runner up team.

Back in 2018 there was medal wins in Olympic Trap for Kirsty Hegarty with silver medals in both the Commonwealth Games and European Chmpionships while in the DTL discipline Katie McQuillan won European Championships gold medal in Wales.

The Thatch Club has been developing a strong field of junior shooters under the guidance of Raymond Clyde and in the DTL team that competed in Northumberland back in July.

They were Scott Magill, Cody Brady, Stephen Scott, Mark Hunter and Oisin McAteer, and they all picked up various trophies and medals throughout the year.

Thatch CTC chairman Billy Wright and President Dessie Gray told the Mayor how proud they were of the club.

They, along with current club secretary Willie Donnelly, had helped set the club up 30 years ago.

“Back then we never could have foreseen the International successes members are achieving today,” said the Chairman.

He said the shooters were proud to be representing the country, the club and the Ballymena area.

Mayor Cllr. Morrow, thanked the Club for the work they do in the community and congratulated the members.

“It is great for the Borough and I wish the club even more success for 2020,” she said.