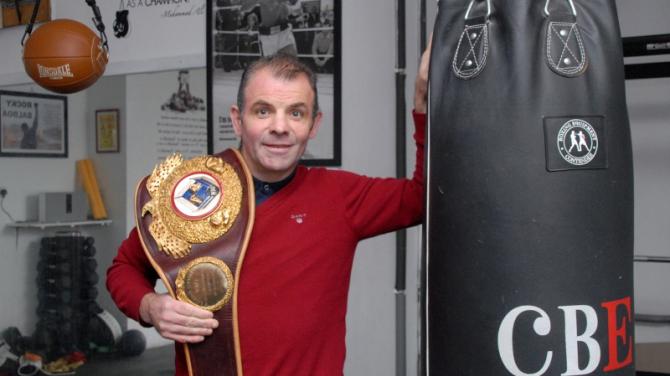 The former All Saints amateur boxer from the town tangled with Chicago Lorenzo Smith and won unanimously on points to take the coveted crown.

I had the pleasure of being at ringside covering the bout for Guardian Sport when Loughran was crowned king!

Loughran was to have fought WBO title holder Gert Bo Jacobson, but at the last minute the Dane pulled out through illness.

Jacobson relinquished his title and the way was open for local boxer Loughran to become champion of the world.

Loughran told Guardian Sport at the time that Smith was a good mover in the ring but afterthe first five round he was getting through to his body.

"But I was not punching to orders. My corner men kept telling me to let the shots go in fours and fives. But I never managed it. I was always looking for the big one.

Loughran said he had to fight hard to get shots landed on the slippery opponent.

"Towards the end I thought I had him, but every time I thought this he moved off or held me," explained Loughran after his win.

In the 11th round Smith caught Loughran on the nose, bleeding it.

But the Ballymena fighter forgot about it going nto the final round and turned up the heat with a series of combinations which rocked Smith.

The final bell was greeted with thunderous applause. Loughran jumped into the air and acknowledged the fans.

His camp knew he was about to claim the vacant WBO World Welterweight crown.

On this historic night I was invited back to the private celebration party at the Forte Creste Hotel in Dunmurry.

The Loughran family and the World champion's fiancee's family had gathered at the hotel to await Eamonn's arrival.

At 12.45am Eamonn's younger brother Conn, who had been keeping watch at the entrance, announced that the champion was on his way into the building.

WBO World champion Loughran, carrying his belt in its silver metal case, walked towards the entrance.

Conn, acting as doorman, opened the doors for him and the champ strode into the reception to a massive cheer.

Hotel guests, not aware of what was going on, looked on in amazement.

Loughran's father Ned hugged his title winning son. Tears were shed by both.

His mother Susan joined the hugging, crying duo, and she, too, cried with joy.

Loughran was then embraced and kissed by fiancee Angela.

The onlookers cheered and applauded.

While all this was happening dejected looking American Lorenzo Smith viewed proceedings, his 6' 1" frame lying slumped in a very comfortable settee.

Other boxers who had fought on the undercard were in attendance.

Barry splashed out £90 each for four bottles of champagne, while champion Loughran sipped his mineral water.

Everyone enjoyed the buffet and some considerable time later the biggest party of the year came to an end.

* Barry Hearn told the Eamonn Loughran fight fans they should be extremely proud of what the boxer did!

And he took a swipe at the TV company for pulling out of screening the show down.

At the after fight press conference Loughran said the title win was a "dream come true."

"Now I want to make lots of money," quipped Loughran. And he pointed out that every time he connected with Lorenzo Smith he was hurting him.

Loughran, known for his punching power, said he was a little disappointed at not taking out Smith with a smashing right hand.

He said he enjoyed going the 12 rounds, saying it was a new experience and would stand him in good stead for the future.

Meanwhile, a few days after winning the World title Loughran was back at All Saints ABC, much to the delight of the young boxers.

He spoke with the lads, telling them if they worked hard they could make it to the top.