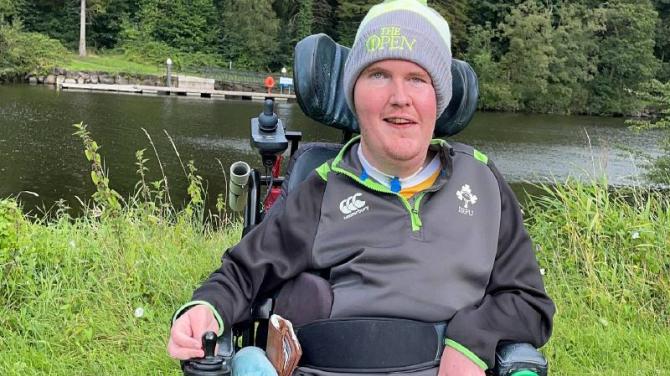 PORTGLENONE man, Conór O’Kane, has been shortlisted for the Positive Role Model Award in Disability Category at the National Diversity Awards 2022.

An astonishing 72,000 people were nominated this year alone and 126 nominees, including Conór, were recognised for their various achievements nationwide.

Community organisations and role models from across the UK will head to Liverpool Anglican Cathedral on September 16 to witness the 2022 winners being crowned the best of British diversity.

Amongst those being honoured are charities, campaigners and activists, all of whom work tirelessly to combat injustice and discrimination in very different ways.

Conór O’Kane is the only person from Northern Ireland to be shortlisted in the category of Positive Role Model Award in Disability.

As a result he has severe weakness in his muscles and uses a powered wheelchair.

He was born with the condition and is now 34 years old.

Conór plays a big part in his local community and volunteers with Good Morning Ballymena, a telephone befriending service.

He said: “I started this during the first lockdown because it gave me something to focus on. Importantly I was able to give something back to the community.”

Conór is also one of the directors of local lived-experience led charity, Mae Murray Foundation.

One of the Foundation’s main achievements has been introducing beach mobility equipment to Northern Ireland- an initiative helping hundreds of people to access and enjoy beaches.

Conór really thrives by helping others.

He stated: “I personally understand importance of breaking down barriers and participating, so I am proud to help others as well.”

Conór also volunteers with his local enterprise group by maintaining their website and looking after their social media.

The County Antrim man lives with his parents and dog Mitzy.

He loves to spend time with his girlfriend Joanne and has made trips abroad with his friends - notably to Las Vegas - “a dream come true for a man who enjoys the odd flutter!”

Conór said: “I try not to let my disability stop me from living my best life possible. A positive outlook helps me achieve this.

“I have fantastic family and friend support, so if I was to win this award it would be for them.

“They are the ones that have made me the person I am today and I can’t thank them enough for that.

“From 72,000 entrants down to the final eight in my category really does make me smile.

“I feel on top of the world and a winner already.

“I’m proud of how far I’ve come in my own journey as a role model.

“In November 2018 I started a blog page through Instagram (@gingerok) and on Facebook (Conór Ginger O’Kane blogs) where I document “the week that was” in my #7smiles posts.

“I blog about what makes me tick, my disability and how I live a normal and fulfilled life.”

Conór is a massive sports’ fan.

He has represented Northern Ireland in Powerchair Football.

He plays and coaches Boccia with his local club Antrim All Stars Boccia Club.

He is also heavily involved with his local GAA team, Roger Casements GAC, and attends their matches regularly.

He has even coached the under 16 team with some of his friends.

He supports Manchester United “but don’t hold that against me,” he quipped.

Direct Line Group, Kantar and The British Army have recently been announced as sponsors of the pioneering awards that have paid tribute to over 1000 grass root groups and diversity champions since its inception.

ITV News are also listed amongst a host of companies showcasing their support to recognising diverse talent, providing a platform to our unsung heroes.

Helen Robinson, D&I & Community Engagement Manager, Auto Trader UK, said: “At Auto Trader we are delighted to partner with the National Diversity Awards for another year and celebrate the magnificent people and community groups that are making the UK more diverse and inclusive.

“We want to recognise their efforts, share their stories far and wide to encourage others to support their work as well as inspire them to take action.”

Author and philanthropist, Katie Piper said: “I am so proud to be on the judging panel for the National Diversity Awards.

“In what has been a tough year for many, I am so pleased these awards create and celebrate a new generation of positive role models.

“As a campaigner myself, I will love reading about the excellent achievements of grass-root communities which tackle the issues in today’s society with sheer dedication.

“I can’t wait to honour these charities, role models and community heroes who will have shown outstanding commitment to enhancing equality, diversity and inclusion.”

Paul Sesay, Founder and CEO of the National Diversity Awards added: “What an incredible year it has been for nominations, we received more than ever before showcasing the UK’s role models in all their glory.

“Producing this shortlist was extremely difficult due to the vast amount of invaluable work being carried out.

“The UK has truly embraced the spirit of The National Diversity Awards by uniting through adversity to create a host of incredible initiatives.

“The profound impact made by all our nominees is life changing, and I feel humbled to know that so much goodness is all around us.

“After weeks of deliberating and thousands of heartfelt testimonials later, I am delighted to finally present to you the best of British Diversity. Congratulations to all of our shortlisted nominees, it is an honour to recognise your fearlessness, resilience and humanitarian efforts with the rest of the world.

“Let’s continue the fight for justice, unity and equality for all”.

To view a full list of nominees please visit www.nationaldiversityawards.co.uk