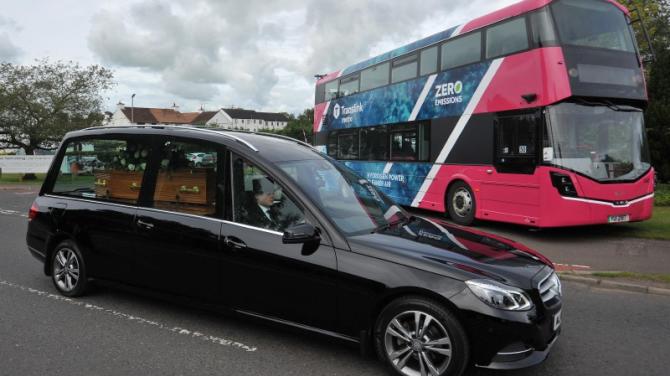 Hundreds of Wrightbus employees formed a guard of honour outside the Ballymena factory in tribute to Sir William Wright, whose funeral was today (WEDS 27 JULY).

Management and factory staff joined forces in huge numbers to pay their respects as Sir William’s funeral cortege passed by.

Tributes have poured in from across the world following the death of the 94-year-old at the weekend, with politicians, civic leaders, business people and community figureheads all recognising Sir Wiliam’s impact.

Wrightbus executive chairman Jo Bamford praised the legacy of Sir William, saying he created the platform for a business which was now leading the world.

His comments were echoed by Wrightbus Chief Executive, Buta Atwal, who said the guard of honour was a “fitting tribute” to a man who had put Wrightbus on the map.

“Everyone here at Wrightbus has been saddened by the death of Sir William but they were determined to pay their respects,” he explained.

“The guard of honour was our way of thanking him for what he’s done for this business and this whole area, and we hope the family recognise that we will never forget the legacy he has left behind.”

Wrightbus employs more than 1,000 people at its factory in Ballymena, Co Antrim, and produced the world’s first hydrogen double-deck bus. Its zero-emission battery electric bus was recently named as the most efficient in the world, with orders coming in from around the globe.