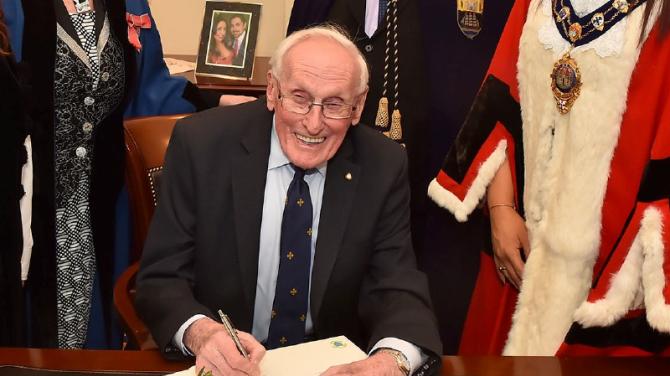 TRIBUTES have been paid to prominent Ballymena industrialist, Sir William Wright, aged 94,who passed away in the early hours of this morning.

He said: “With the passing of Sir William Wright, Ballymena has lost a giant.

“A Godly man of faith. A loyal Ulsterman. An entrepreneur without match. We will not see his like again.

“I wish to extend to Lady Wright and to all the family my and my families and our party’s sincerest condolences for their loss. Sir William was a giant character.

“He was one of the last true captains of industry and commerce and a man who has left his mark, not just locally but globally. Wherever there is engineering or manufacturing or sales of buses his genius will be remembered.

“I have had the honour of knowing him and his family for decades. He was both a political and business leader.

“He cared passionately about the employment and skills training of local people. He loved Northern Ireland and he was dedicated in everything that he did.

“When in his presence you knew you were with someone remarkable. He had that X factor that, so few possess. But those who have it make a difference to all around. Northern Ireland was so fortunate to have him as a son.

“To his immediate and extended family. They can take courage in his faith, which was strong. His witness purposeful. At their time of great loss, they know many people across the entire country will be praying for them.

The renowned Wrightbus founder was Knighted for his contribution to industry in 2018.

He co-founded the operation with his father (Robert Wright and Son) in the immediate aftermath of the Second World War. In the past few years the frm suffered a financial collapse and was subsequently bought over by Jo Bamford.

Some key milestones for the company include the manufacture of mobile shops in the 1950s and the firm's entry into the PSV market in the 1970s.

Under his supervision, Wrightbus also introduced the first low floor bus to the UK market as far back as 1993 and was a pioneer in making this type of bus specification readily available to operators and, in turn, passengers.

More on this story in this week’s Guardian.