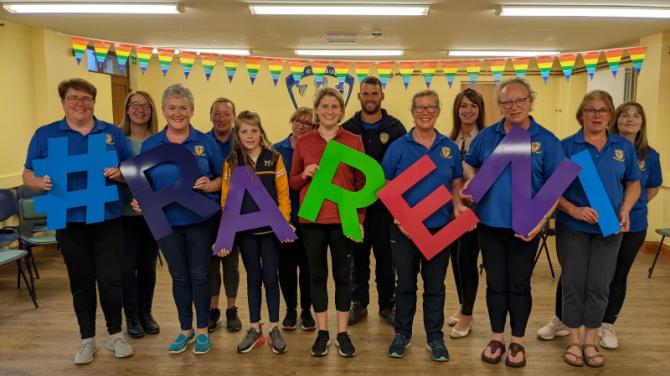 As the morning of the 1st December 2021 unfolded the Black family in Glenarm couldn’t begin to imagine the tragedy that was about to occur.

Sadly, their beautiful five-year-old daughter Maggie, the girl who had a smile for everyone, was taken from them by an undiagnosed rare condition...Addison’s Disease.

Rare disease is a strange term because it isn’t actually rare at all.

There are more than 7,000 conditions that fall under the definition of rare and one in 17 people will be affected in their lifetime so that’s more than 110,000 in Northern Ireland.

It can take five to ten years to get a diagnosis and usually there are three or four misdiagnoses along the way.

In Maggie’s case there was no diagnosis, there was no obvious warning and when she took unwell, she was in the Glens of Antrim, so the ambulance was over an hour away.

Her quick-thinking family phoned a family member, a local fire fighter and the fire crew, all first responder trained, arrived and provided support until the ambulance came.

Although, sadly, this didn’t save Maggie, knowing that she had professional people around her with medical expertise and lifesaving equipment on hand gave the family great comfort.

So, the family set out to campaign for “Maggie’s Call” so that the fire and rescue service would be allowed to respond in remote areas until the paramedics could get to the scene.

Their dedication and determination saw a pilot agreed by the Minister for Health, Robin Swann and that pilot has now been established in Carnlough.

So, Maggie and her Call has already impacted positively on the lives of every single person living in the Glens of Antrim, with the potential to roll out across all rural areas of Northern Ireland if it goes well.

But the story doesn’t stop there.

Although the air ambulance wasn’t called back in December the Black family recognised the huge impact that the service has to play in supporting rural areas and were able to hand over a massive donation of £13,000 to the lifesaving organisation, after fundraising for them in Maggie’s memory.

And there was more.

Maggie’s mum, Sheenagh comes from the little district of Moneyglass outside Toomebridge and the community of Moneyglass, led by the Mothers and Others group from St Ergnat’s GAC rallied around to show their compassion.

A bake sale was organised to raise money for the Northern Ireland Rare Disease Partnership (NIRDP).

The partnership is a small charity with a big vision “to ensure that no-one is disadvantaged by the rarity of their condition” and they advocate, connect, educate and innovate on behalf of the 110,000 people in Northern Ireland living with a rare condition.

They provide front facing support, they work to ensure that people training in the medical field and the community are more “Rare Aware”, they encourage young people to consider the “rare health” field as a future career, they lobby the powers that be to provide equitable access to services for this often-unrecognised community.

Now a community bake sale might be expected to raise a few hundred pounds.

Not this cake sale, not this community!

The high regard that the Black family are held in and the tragic circumstances that took wee Maggie away touched everyone.

People came from far and wide.  The cakes sold out in the first hour, but the community continued to come, and to give, and an amazing sum of £5,810 was raised.

The Partnership would like to thank the Black family for considering others in this time of great loss, and also to the Mothers and Others Group at St Ergnat’s GAC for their tremendous fundraising effort.

Every penny raised will be used to further the Partnership’s vision and provide support to the “rare” community.