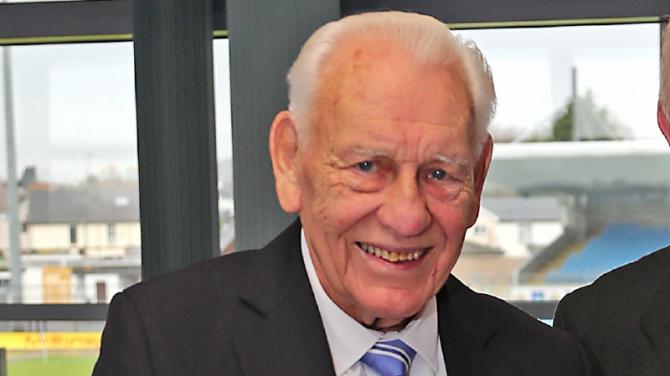 The 91-year-old passed away peacefully in hospital.

Neil attended a Ballymena United corporate lunch at The Showgrounds back in December 2019.

His son Ian accompanied him, and has said how much he enjoyed the occasion.

“The special mention of him at the dinner was very kind,” said Ian.

Meanwhile, ‘keeper Neil spent a couple of seasons with the Showgrounds side, playing mostly in the Reserves.

“When I arrived at United they already had goal-keepers, including Ossie Bailie,” recalled Neil at the corporate lunch.

“Ossie was a brilliant all round sportsman. He taught me all I knew about goal-keeping.”

The manager at the time Neil joined Ballymena was Norman Kernaghan.

He had an outstanding career, primarily with Belfast Celtic, then as manager of Northern Ireland’s Youth team, before becoming an Irish FA Grade One coach.

The other ‘keepers at Ballymena during Neil’s time at the Showgrounds were Bailie, Jimmy Rodgers and Walter Long.

“I played mostly in the Reserves,” he told Guardian Sport. “But I got a few games in the first team too.”

Neil’s visit back to the Showgrounds came as a result of a win in a prize draw, held by Abbey Lodge Masonic Order, which raised funds for charities.

One of the prizes was tickets for the Ballymena United corporate lunch in the Des Allen Suite!

And Neil’s son Ian was the winner and took his dad to the excellent four course meal, entertainment by comedian Gene Fitzpartick, and the Ballymena United v Institute Premiership match at the Showgrounds.

“It was nice to be back in Ballymena,” said Neil, who was at the table of United manager David Jeffrey’s partner Rose.

Edwin McLaughlin, MC that day, announced that Neil was in attendance, along with ex-United manager, Alan Fraser, and other ex-Ballymena players, including John Garrett and Graham Fox.