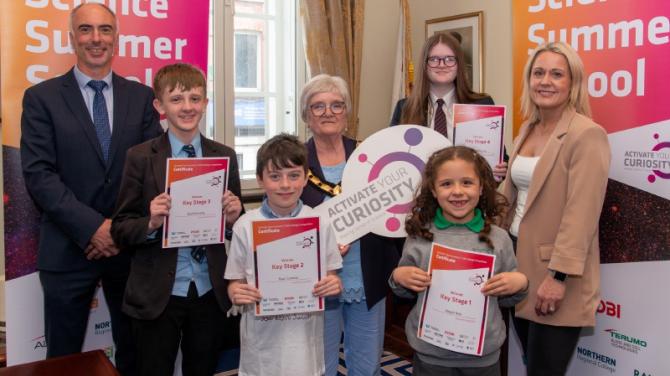 Pupils from across the borough were invited to enter an exciting Science Summer School competition in honour of the borough’s rich industrial heritage and the sustainability and future of fashion.

Mid and East Antrim Borough Council asked pupils to ‘Activate their Curiosity’ by creating an original t-shirt design reflecting First Attempts; Activate your Curiosity; or The Universe with the overall winner getting the opportunity to meet with Professor Brian Cox CBE later this year. In addition, the designs of the four key stage-winning entries will be placed on display in the Gallery of First Attempts Exhibition at The Braid in November.

Graham Whitehurst Chair of the MTF commented: “The Science Summer School is a central initiative to establish this key link between schools and industry.”

Deputy Mayor Councillor Beth Adger MBE said: “It was a privilege to welcome the winners of each of the four key stages of this competition, to announce the overall winner and to see their winning design brought to life.

“In total 185 entries were received, which is reflective of the strong relationship between council and schools with each entry showcasing the high calibre of talent we have here in the borough. Initiatives such as this encourages pupils to get creative and think about what has gone before us, what is around us and what lies ahead, particularly in relation to fast fashion and its sustainability.”

The winning design by Harryville Primary School pupil Ryan Conway, focused on first attempts and highlighted the importance of perseverance. His design was brought to life by Whitehead based company, Rhuban Design, who use only eco-friendly, organic sustainable clothing.

Maura Alexander founder of Rhuban Design said: “It was an honour to be part of this competition and to produce this wonderful design. With a fantastic pool of talent in the borough we look forward to working with fashion designers of the future.”