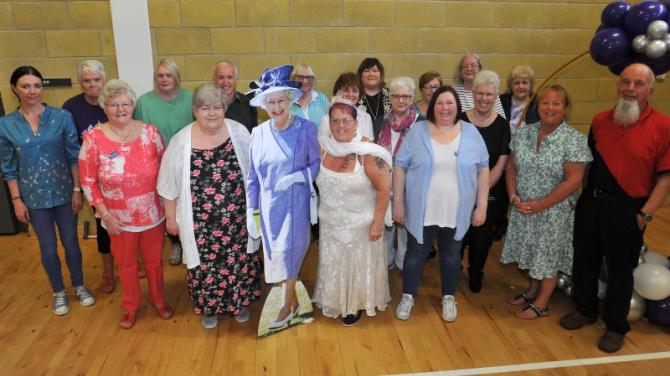 Afternoon tea was all handmade by the volunteers.

“It was a fantastic spread as you can see from their faces and plates,” outlined Debbie Chestnutt, from GMB. “They loved it.”

The event was sponsored by Mid and East Antrim Council.

A lot of planning had gone into the party and this showed on the day. Separate displays illustrating each decade of the Queen’s reign were arranged around the hall.

The tables were tastefully decorated and bone china sets had been obtained to add an air of class to the occasion. With many wearing the union jack hats that were available and bunting around the hall the scene was very colourful

All the “goodies” to eat had been provided by the volunteers and no one went home hungry!

Live background music was provided by Rachel Coulter and Ian McKay, two of the volunteers.

There was also a photo booth where members could have their photograph taken along with a life size figure of the Queen. There were prizes to be won for those who enjoy the excitement of a raffle.

Everyone was given a bag containing mementos of the event including mask of the Queen, flags and blower hats.

Speeches were kept to a minimum with Debbie Chestnutt, the Good Morning Administrator thanking all those who had arranged the celebration. She also said it was great that members could at last get out and come together to enjoy themselves. All heartily agreed!

This takes place between 9am and 1pm.

And there are a couple of Tea Dance dates for your diary!

These are Tuesday, October 18, and Tuesday, November 15.

And Debbie points out that in this their 10th Anniversary they plan a number of surprises for volunteers throughout this year.

Good Morning Ballymena will also be in the Tower Shopping Centre Pop Up Shop from Monday, July 25, until Saturday, July 30.

“Come and visit us for a wee cup of tea or coffee and a chat,” invited Debbie.

* If you would like to get involved in Good Morning Ballymena send an email to - goodmorningballymena@hotmail.co.uk.