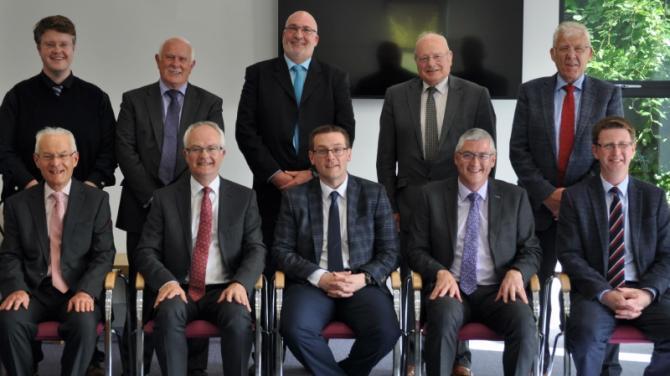 BALLYMENA man, Keith McIlroy was ‘licensed’ for the Ministry of the Presbyterian Church in Ireland in front of his ‘home’ congregation of High Kirk on Sunday, June 19.

Born and raised in the City of Seven Towers, Keith is married to Hayley and the couple have a young daughter called Harley.

Moving on from High Kirk will be akin to leaving home for Keith who was baptised there as a child and made a profession of faith in Jesus as his Saviour at the age of nine.

With great honesty, Keith says that this early commitment did not bear much fruit. God, however, had a very special plan for his life.

Keith recalls: “I headed off to university to study Film in Wales before moving to Hollywood, California in 2004 to try and make it in the movie industry. It was there that I powerfully encountered God through his word and came to true saving faith.”

Subsequently, Keith moved back to Wales which is where he met Hayley who is from England.

An eventual return to Northern Ireland saw Keith take up a role of Youth and Family worker for St James's Presbyterian in Ballymoney for three years.

He then worked with ex-offenders at Thompson House for seven years. During that time, he went back to university and studied for a Masters and PhD in theology.

For the last four years, Keith has been employed at High Kirk as the Associate for Mission and Discipleship where his passion for preaching and ministry flourished.

Key influences in Keith’s walk with God have been his parents, his two brothers and of course, Hayley.

His fellow elder at High Kirk, Philip McCartney and Rev. Gareth McFadden, a former Associate Minister there who is now serving at Kilbride, near Templepatrick have also been key figures on Keith’s path to Pulpit Ministry.

Talking about his immediate future, Keith said: “My assistantship is in Ballyweaney Presbyterian church outside Cloughmills and I'm really looking forward to getting stuck into the work in a great congregation. I'm eligible for a call to my own church in September 2023.”