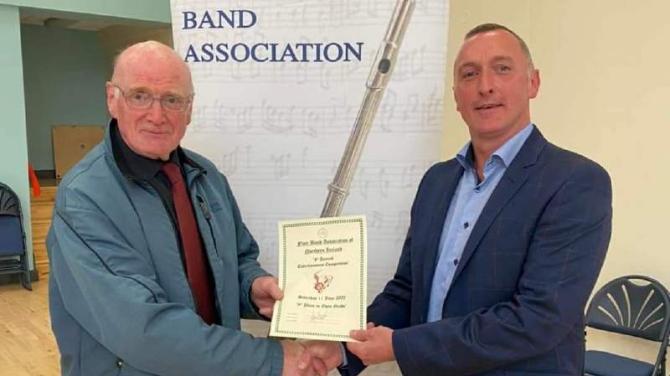 Following a two year period when it had not been possible to hold the event, the organisers were delighted to welcome a total of nine of the best concert flute bands from across the province to the competition.

As usual the top awards were shared between “kingpins” Ballygowan and Ballylone Flute bands, but there were a number of other awards available on the day.

It was a delighted quorum of Young Conquerors members who heard the band had been placed 3rd in the March section and also in overall performance by adjudicator Keith Anderson.

Keith is well known in musical circles in his position as conductor of Laganvale Brass Band.

For the Young Conquerors, these achievements follow on from a number of successful results in both the North of Ireland Championships Senior Flute section (2021) and the Flute Band Association Own Choice contest (2022).

Much of the credit for the band’s recent positive progress is down to the hard work put in by talented conductor Andrew Douglas, one of the country’s top flautists.

Andrew regularly plays with the Ulster Orchestra, the RTE Concert Orchestra and a growing number of other renowned ensembles from Europe and across the world.

Remarkably, the Young Conquerors has been an integral part of Ballymena’s cultural history since 1886, undoubtedly the longest surviving musical group in the area, and indeed beyond.

A very different band would have been seen over 100 years ago. From a marching band with fife and drum there now exists a flute orchestra, comprising instruments including C piccolo, C Concerts, Altos, C Bass, Contra Alto and Contra Bass, not forgetting the full range of percussion.

The band does not solely participate in contest work, performing in churches, concerts and a variety of community activities throughout the year.

Just recently it played at the Jubilee celebrations in St Patrick’s Church Ballymena, and will present a programme of music on Sunday 2nd July at 2pm at the Gateway. Antrim Lough Shore.

Prior to Covid, the band held a successful annual concert in the Braid Arts Centre, an event highly regarded as on of the cultural highlights of the year. It is hoped to begin this again as soon as possible.

The band is always on the lookout for new players ,both flute and percussion, not only to help us maintain our current standard but also to evolve, develop and ensure the band is fit for purpose to progress in the years to come.