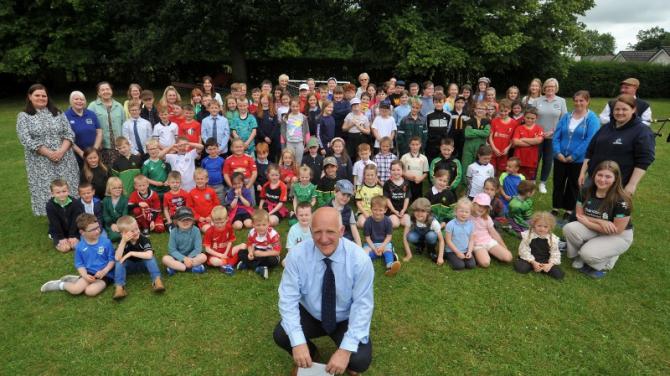 CARNAGHTS Primary School Principal Ian Henderson is retiring after 14 years in the post.

Last week in glorious weather conditions the school staff and pupils had a farewell assembly outside.

Piper Ryan Montgomery, from Broughshane and District, piped Mr. Henderson in, and at the close played Auld Lang Syne, with their own words, for their own version, in tribute to the Principal.

The children did not let themselves - with the Primary 1’s loud and word perfect!

Mr. Henderson said he had a wonderful time in charge at Carnaghts Primary.

He said he is sad to be leaving, but is looking forward to retirement - and having more time to follow his beloved Liverpool FC and get in a few more rounds of golf!

“It was a pleasure to be involved with all the children and the staff throughout my time at Carnaghts Primary School,” said Mr. Henderson.

“And may I wish my replacement, Mr. Graham Murray, the very best in his new job.”

Mr. Murray was Vice-Principal at Hezlett Primary School in Castlerock.

“We congratulate him and look forward to introducing him to the children and staff in due course,” said Mr. Henderson.

The out-going Principal said he will work as closely as possible with Mr. Murray to ensure a smooth transition of leadership and management within the school.

Meanwhile, at the retirement assembly, the pupils were asked to come along dressed in things that were associated with Mr. Henderson!

There were quite a few in Liverpool tops - which went down very well - and others came with a farming theme, as the Principal has a interest there too.

Mr. Henderson has spent 34 years in education - 14 of these as a teaching/principal.

He began as a teacher at Broughshane Primary School, staying for 13 years, and then switched to the Schools Board where he remained for 18 months.

But he missed the teaching and came back as Principal, this time at Castledawson Primary, and spent three years there.

He then was Principal at Holywood Primary School for three years.

Last week he was ordered to stay out of the Assembly Hall at Carnaughts - as certain things to mark his retirement were in the process of being prepared.

Drawings and paintings by the pupils, all expressing their fondness of Mr. Henderson, appeared on the walls in the hall.

Reflecting on almost three and a half decades teaching Mr. Henderson emphasised that it was the children which made the job so worthwhile.

After the Assembly Mr. Henderson presented Jubilee Bibles to the Primary 7 class.

* Mr. Henderson said he hopes to talk to as many parents this week before his official departure. He wants to thank them in person for their support given over the years.

The Principal’s daughter graduates this Thursday; his last day in school will be tomorrow (Wednesday).