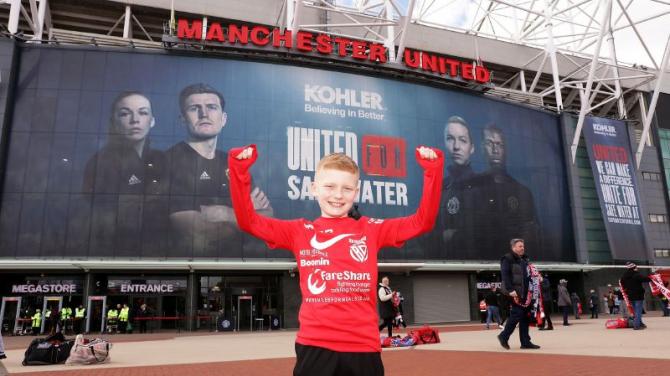 BALLYMENA Academy schoolboy Ben Dickinson has been given a prestigious Diana Award for his charity work.

The Diana Award is the highest accolade a young person in the UK can receive for social action or humanitarian efforts.

Established in memory of Diana, Princess of Wales, and supported by her two sons, the Duke of Cambridge and the Duke of Sussex, the award is presented annually to nine to 25-year-olds who have selflessly created positive change in their communities.

Ben, a former pupil at Ballykeel Primary School, received his award after completing a 10-day charity trek from Larne to the home of his favourite football team, Manchester United.

The Miles for Meals campaign came hot on the heels of his previous fundraising efforts, where he raised over £7,000 for the Northern Ireland Children's Hospice by running a mile every day for 26 days.

During this time, Ben was surprised via Zoom by his hero, Man United and England forward Marcus Rashford, who congratulated him on his fundraising efforts.

Ben said: “I never could have imagined that the small ideas I came up with in my bedroom to keep me active and raise some money for two worthy charities could grow so big or have such a massive impact on the lives of people across the UK.

“I didn't do it for reward, I just wanted to help young people less fortunate than myself in a fun way, so to receive the Diana Award doing something I enjoy is just the icing on the cake.”

On his arrival at Old Trafford, Manchester United gave Ben a hero's welcome to celebrate his achievements.

John Shiels, chief executive of Manchester United Foundation, said it was a pleasure to meet such an inspiring young boy and support him as he tackles the important issue of food poverty in the UK.

“Ben's compassion for others shines through and it is clear to see that he truly cares about making a positive difference in the lives of those who need it most, so we are thrilled to see him win this award,” said the CE.

Tessy Ojo, Chief Executive of the Diana Award, said it was established with a core aim of recognising extraordinary young people who are selflessly leading positive social change, and Ben could not be more deserving of this accolade.

“His incredible act of generosity and selflessness will go a long way in helping many people across Northern Ireland and beyond, and will most certainly have a lasting impact,” said Tessy.

“We would like to thank Ben for his huge contribution to society and extend a warm congratulations on winning the Diana Award.

“We can't wait to see what he does next.”