Creative talents on show at meeting 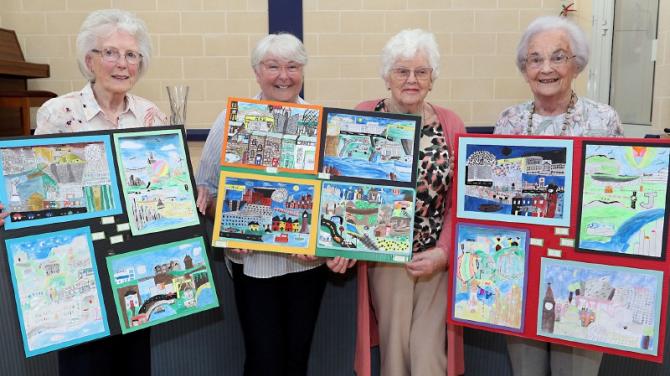 Galgorm Community Centre was a hive of activity when the members gathered for their monthly afternoon meeting.

Lynda Brooks welcomed everyone, including Janet Wilson who was invited to judge two competitions.

One of the members Barbara Morrison, was in charge of the main creative activity which was a water colour painting session. She used a projector to give a step-by-step tutorial to assist her presentation.

Rosemary Moore, Vice President thanked Barbara on behalf of the members, for all her work preparing and delivering such an enjoyable activity.

A delicious afternoon tea followed which had been made by a team of members.

Lynda Brooks thanked Janet Wilson for judging craft work made during the lockdowns. The winner was Rosemary Frayne and she was presented with the Hood Salver.

Janet also judged the entries submitted by P7 pupils of Gracehill Primary School. Prizes will be presented at a school assembly later in June.

Members of the institute who are in the Slemish Area Choir had a very successful day at the Northern Ireland Women’s Institute Music Festival, which took place recently in Templepatrick.

Quite a number of members have their entries ready for Ballymena Show and Gillian Fraser is representing the institute in the annual Golfer of the Year 2022 tournament –in Newtownstewart near Omagh, later this month.

2022 is the 85th anniversary of the institute’s formation. Activities are planned for the coming months to celebrate this landmark. Lynda said it has been a busy year and it felt so good to enjoy freedom safely again and very uplifting to see community life returning. She wished everyone a safe journey home and was delighted there had been such an excellent attendance at the meeting.