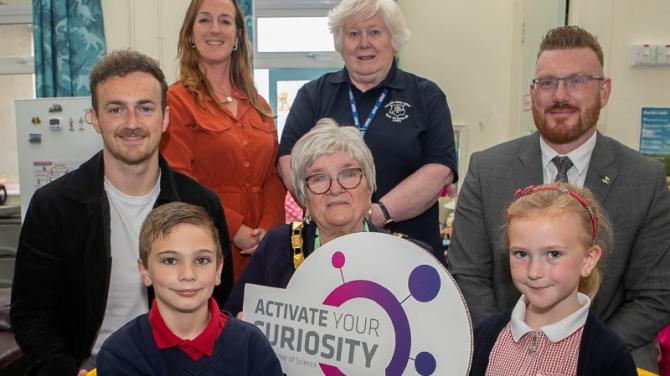 A Ballymena schoolboy whose innovative idea was brought to life by an engineering firm as part of Mid and East Antrim Borough Council’s Science Summer School Innovation Competition has been praised by the Deputy Mayor.

Pictured in the photograph are:

The Guardian has previously reported how Harryville Primary school pupil Noah Steele won overall Winning Design in the Council’s ‘Activate Your Curiosity’ competition, which was sponsored by the PAC Group.

Pupils from across the Borough were asked to design an innovative idea that could improve our lives for the future and judges were not disappointed by the amazing designs submitted.

Noah was born with part of his right arm missing and said he wanted to create something special for children and adults like him. Taking inspiration from The Avengers franchise, Noah designed an original prosthetic arm equipped with a range of interchangeable attachments including a Lego build plate, a storage compartment with magnetic closure, two Lego block attachments and most importantly a Hulk hand attachment!

The engineers at PAC Group, who sponsored the competition, were so impressed with Noah’s design that they decided to bring it to life. The finished prosthetic was manufactured using carbon fibre-infused nylon Onyx, which is almost twice as strong as ABS and temperature resistant up to 145C.

Deputy Mayor Councillor Beth Adger MBE said: “It was a delight to meet Noah and get to see his invention realised. Science Summer School encourages pupils to think outside the box in terms of what is possible using the subject of STEAM - science, technology, engineering, arts and mathematics - and through this competition we have seen many aspirational ideas. I look forward to watching Noah develop further ideas in the future.”

Presenting Noah with the finished product, Darren Leslie, Business Development Manager at PAC Group said: “We’re delighted to present Noah with a ‘real life’ version of his original design and hope it inspires him to continue being creative and innovative. PAC Group are very proud to have delivered such a unique concept for a very special customer.”

Noah’s design will be displayed with the other ideas in the Gallery of First Attempts in the Braid Museum, Ballymena to coincide with the first Science Summer School in Northern Ireland hosted by Professor Brian Cox CBE in November 2022.

Science Summer School is a collaborative vision for the Borough to nurture future talent, through a series of engagement activities between schools and companies and aims to inspire young people to become the next generation of scientists. The inspirational programme will mix the best of STEAM (Science, Technology, Engineering, Arts and Maths) through a series of TED-style talks, seminars, discussions and hands-on workshops.

For more information visit the Science Summer School section on the MEA website.