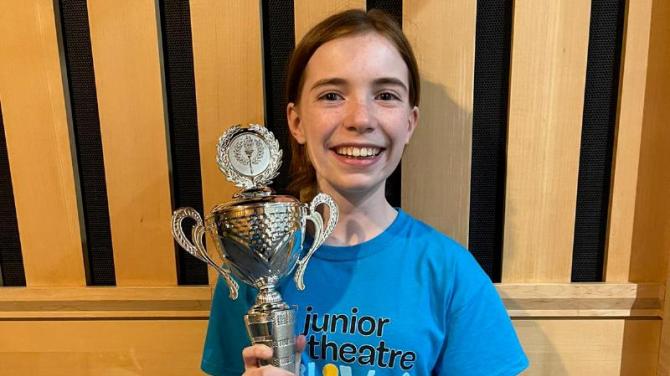 ONE talented young student from Ballymena has managed to scoop the award for ‘Outstanding Individual Performance’ at the MTI Junior Theatre Festival held in the ICC Birmingham.

32 schools from across UK, Europe and the USA compete for the coveted awards each year, but it seems these BSPA students are holding on to the title for yet another year!

Phoebe says: “I was so delighted to be chosen to win this amazing award, I love musical theatre and love attending BSPA each week, to get the chance to perform in Birmingham at this huge event was already a dream come true, so to actually win made it even better!

“This week I am looking forward to playing the role of Annie in the Ballymena BSPA production of Annie at the Courtyard Theatre – it’s just brilliant to be on the stage performing for my friends and family alongside all my BSPA friends and family!”

Celebrating its fifth anniversary, the MTI Junior Theatre Festival exists to bring together schools and youth groups from across the UK and Europe for a day of musical theatre mayhem, providing workshops for students and teachers alike, special showcases, guest performances and of course an awards ceremony.

The students, aged 10-18 from across Europe and the UK descended upon Birmingham’s ICC and enjoyed a packed day celebrating all things musical theatre, and once again, BSPA have showcased the incredible talent Northern Ireland is renowned for.

Tina McVeigh, Managing Director of BSPA, says she is incredibly proud of the students who took part, and all that they have achieved: “This year we took our biggest cast yet to the MTI (Europe) Junior Theatre Festival, a total of 37 young people from across our 8 schools aged 10 -18 years.

“They have spent the last two months working very hard to prepare a piece for adjudication and three pieces to present on the main stage and all the hard work has once again paid off. They have shown that their commitment, passion and love for musical theatre has secured them this well-deserved award, I couldn’t be prouder!”

BSPA presented a ten-minute production of Shrek Junior which won the hearts and minds of the judges, Ryan McAuley of MTI (Europe) Junior Theatre Festival said: “Under the inspiring leadership of Tina McVeigh and Peter Corry it has been a joy to see the young people of BSPA achieve excellence throughout the last 5 years of the MTI Junior Theatre Festival.

“The group’s positivity, ambition and sheer talent have ensured that they have been consistently invited to perform on the main stage. We have been delighted with the outstanding contributions the group have made to the festival, in particular, the emotionally charged and incredibly creative videos for our launch of Matilda the Musical JR. alongside the outstanding live performances of Raise Your Voice.

“We are hugely grateful to everyone involved and are delighted that the talents of the young people of Northern Ireland are flourishing.”

To find out more about either joining the Belfast School of Performing Arts please visit www.thebspa.co.uk