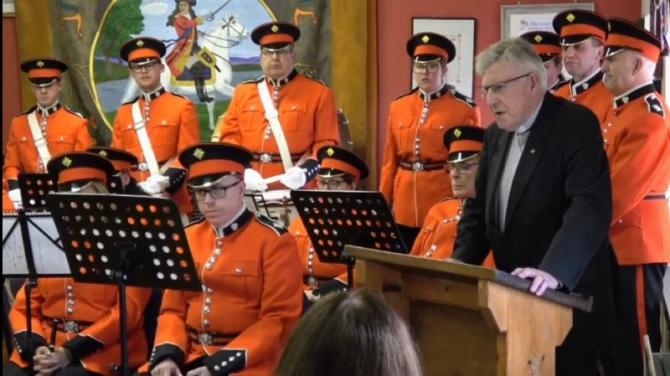 BROUGHSHANE’S Sir George White Memorial Flute Band have finally dedicated their new uniforms - after a lengthy delay due to the Covid pandemic.

Last week the band held a an evening in the Orange Hall in Broughshane when they were joined by friends, family and members of the Loyal Orders.

Band Secretary Robert Glenholmes commented “ The band has been needing this uniform for a few years.

“The time has been extended due to Covid and unbelievably we were first measured up in January 2020 and had to be measured again at the end of 2021 as younger members had grown and some of us older members had lost or gained weight during the pandemic.

“We would like to thank BD Garments and Canopy Regalia for supplying the uniform and belts.

“Thanks also go to our Chairman Hugh Hunter for his tireless work in helping bring the new uniform to fruition.”

The short dedication service was conducted by former Dean of Connor The Very Reverend John Bond who, although retired, has been a personal friend to the band for a long number of years.

“When a dedication evening was first discussed by the Committee the first and only name that everyone mentioned was Dean Bond and we were very grateful that he accepted our invitation to preside over the short service.” said Mr Glenholmes.

With the dedication complete the band was fully preparedfor their participation in the massive parade being held by the Grand Orange Lodge of Ireland to celebrate the Centenary of Northern Ireland.

“Back in 2012 our band were honoured to lead the officers of County Antrim at the Covenant centenary parade and we were really pleased to once again be leading the County at another centenary event.

“Unveiling the new uniform prior to this momentous occasion made it even more memorable for the band and we would like to thank the County Antrim Grand Orange Lodge officers for engaging us.” said Mr Glenholmes.

“With the day being very much a day for the Orange it will be great to get the band back out wearing our traditional colour of Orange tunics”.

Following a religious open-air service the parade on Saturday left Stormont estate at 1pm and made its way to the City Hall. Upwards of 120 bands and 20,000 Orange Men, Ladies and Juniors took part.