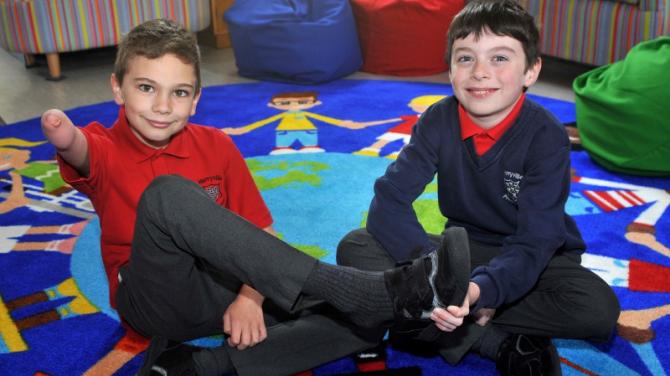 A primary school pupil from Ballymena has walked in the shoes of his best friend to raise funds for a charity which supports children with upper limb differences live life without limits.

Ryan Conway and Noah Steele, both nine-years old, have been friends since nursery and both attend Harryville Primary School.

Ryan decided to take up the Reach charity's' ‘Walk in My Shoes' challenge which saw him complete six tasks one-handed alongside Noah, who was born with upper limb difference.

The primary 5 pupils wanted to help highlight the challenges faced by children with upper limb difference and have also raised an incredible £650 for charity.

Among the challenges the boys completed during April, which was Limb Loss & Limb Difference Awareness Month, were opening a bag of crisps, catching a ball and putting on socks.

Ryan's mother, Joanne Conway, said: “We never set out to raise a large amount of money, it was more for the boys to raise awareness and to normalise differences.

“Noah is very resilient and resourceful and would never let you know if anything was a challenge for him. He always finds a way to do what he needs to do and his mum Julie has been so good at reinforcing that in him.

“Ryan and Noah have been friends since nursery. Ryan wanted to support Noah by doing the challenges and they did help to make him more aware of how difficult it might be to do things.

“The boys started off with a target of £70 and they managed to raise £650 which is a great achievement and we would like to thank everyone who donated.”

There are 19 branches across the UK & Ireland, run by volunteers providing vital opportunities for children and parents to meet. To donate to the charity please visit the justgiving page www.justgiving.com/reachcharity