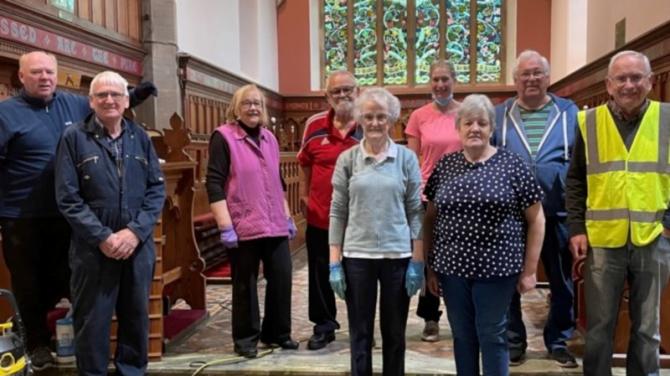 After months of having to use the church hall for Sunday worship the parishioners of St Patrick's are now able to return to the main church building.

The major repair project to address dry rot issues has now been completed.

The total cost of the remedial work which had to be undertaken is almost £600000. This is significantly higher than had been estimated initially.

Despite the enormous financial challenge most of the cost has now been covered by the parish including special donations from parishioners and friends from across the town.

Although all of the work is not immediately obvious, parishioners are delighted that the future of the building has been secured as a result of this extensive exercise.

As one of the most significant buildings in Ballymena, from an architectural perspective, it was particularly important that one of the town's remaining seven towers was secured for future generations.

After the contractors had vacated the building a significant 'clean up' exercise was required in order to prepare the building for re-opening. V

arious teams of parishioners came along to help carry out all of the necessary work. Everyone is looking forward to returning for worship in a building which has been the spiritual home for thousands of people for around 140 years.

The Rector, Canon Mark McConnell thanked everyone who had worked so hard to ensure the success of the project, those who undertook the work, those who contributed to the fundraising appeal and also expressed his appreciation to those parishioners who helped ensure that the building was prepared for re-opening.