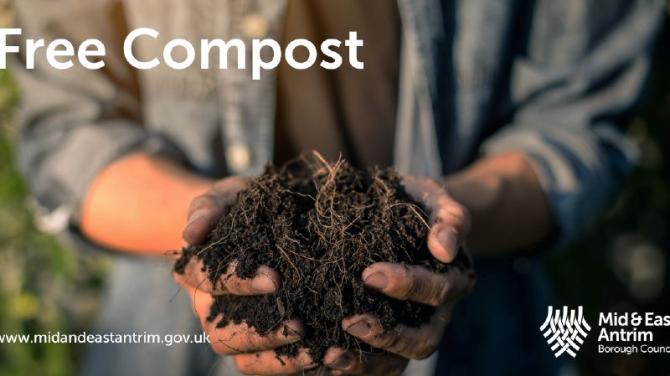 GREEN-fingered enthusiasts and budding gardeners will already know the benefits of composting at home, and during Mid and East Antrim’s Compost Week (2 – 8 May), Mid and East Antrim Borough Council is helping to spread the message.

Residents are invited to pop down to their nearest Household Recycling Centre (HRC) and pick up a free bag of compost, which has been made from food and garden waste collected from our 58,000 households across the borough.

In 2021 Council residents recycled over 20,000 tonnes of green and food waste, diverting this away from landfill, not only saving the Council and ratepayers money, but the compost has been used as a ‘soil improver’ at Council’s parks and open spaces.

Mayor of Mid and East Antrim Councillor William McCaughey has praised citizens for their recycling efforts.

He said: “I commend residents for their overwhelming support in recycling as much food and green waste as possible in brown bins.

“This saves ratepayers’ money and also combats environmental damage. It costs twice as much to dispose of food waste in a black bin as it does to recycle food waste from a brown bin.

“Unwanted food that ends up in landfill is the most polluting type of waste due to the release of harmful gases.Rather than pollute the environment, that waste is increasingly being put to a great use in Mid and East Antrim as high quality compost which is then made available to our residents and this is a complete win-win for all of us in Mid and East Antrim.”

Over 2,000 tonnes of additional food was diverted from black to brown bins during 2021, which reduced landfill costs and resulted in annual savings of over £200,000 – meaning these funds are available for other projects and work within Mid and East Antrim.

So pop down to your local HRC (Waveney Road, Redlands, Glenarm or Larne South) and pick up a bag of compost during Compost Awareness Week.

Please note, we have a limited supply of compost, therefore it is one bag per vehicle, and when it’s gone, it’s gone!

If you would like any more information on food waste to compost, or to find out more about recycling, please visit www.midandeastantrim.gov.uk/bins