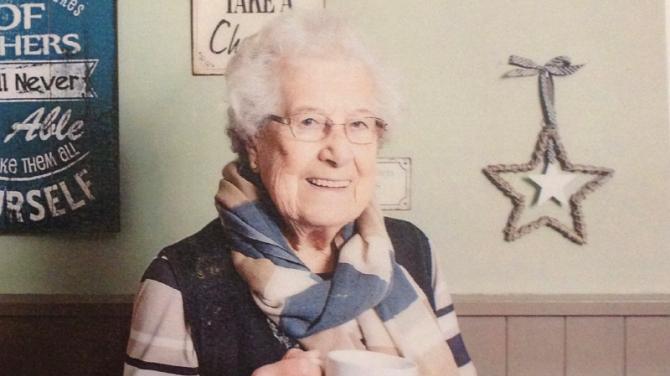 A Cullybackey woman who worked in Gallaher’s Lisnafillan Factory for almost 40 years reached her 100th birthday this week.

And Mary Rainey reckons that a good bowl of porridge to start off the day is here top tip for a long and healthy life!

Born Mary Anderson in Shotts, Lanarkshire, on 27 April 1922, her father Thomas was employed as a miner in Scotland but his family were farmers from Omerbane townland near Cloughmills.

Her mother was Rebecca McAllister, who had family had roots in County Antrim but had migrated to Lanarkshire in the 1890s.

Mary had one older sister, Jean (known as Jeanie). Jeanie was born in Scotland in 1915, and was a nurse.

Jeanie later married James Grant (one of the founder members of Grants Electrical Services in Ballymena) and went on to have a family. Mary and Jeanie were very close throughout their lives. Jeanie died in 2004.

Mary had one younger brother, Tom, who was born after the family returned to County Antrim in the early 1920s. Tom was born in 1926 and emigrated to Australia with his wife and young family the 1950s.

Mary and Jeanie enjoyed trips to Australia to visit Tom on his farm in Timboon, Victoria in the 1980s and 1990s, and kept in touch with extended family who had also emigrated to Australia. Tom died in 2019.

She had to leave school in order begin work in the textile mill at Hillmount. After that, Mary secured a job with Gallaher’s cigarette factory and worked there for almost 40 years.

Mary loved working at the factory, and she formed life-long friendships. She also enjoyed the social circle provided by Gallahers.

She was always a keen follower of the pipe bands, having many family connections in Scotland (through her cousins the McAllisters) who were prominent members of the Shotts and Dykehead pipe band.

Mary maintained a close relationship with her Scottish cousins and enjoyed many trips to Scotland to visit them.

Mary married William Rainey (known as Billy) in 1948. They had one daughter, Rebecca (known as Reba), and they lived in Ard Na Maine, Cullybackey. Billy Rainey died when he was only 42. Mary did not marry again.

Reba went on to train as a teacher at Stranmillis, and she taught at Cullybackey High School. She married Rex Hutchinson in 1973 and they had one daughter, Jayne. Reba tragically died of a brain tumour in 1982. After Reba’s death, Mary helped to raise Jayne.

In Mary’s later years she remained active, she was a terrific baker and her pancakes were the stuff of legend. “I’ll swing the griddle” was a constant refrain if any visitors were expected at the house. She continued to drive until she was 90 and enjoyed being as independent as possible. She loved a shopping trip to Ballymena, or a day out to Belfast or further afield.

Mary enjoyed robust good health for almost all of her life. However, In recent years her mobility deteriorated. She suffered a fall in 2020 which resulted in a broken hip. She now lives in Prospect Nursing Home.