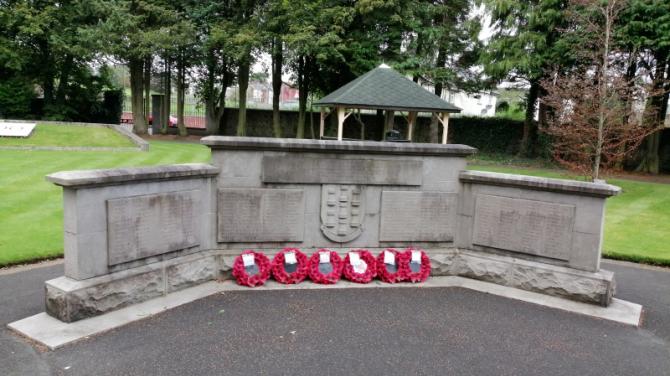 Mid and East Antrim Borough Council has urged locals to come forward in their‘final call of ‘forgotten names’ to be added to the Second World War Memorial in the Memorial Park, Ballymena.

Similar to that completed for the missing names from the WW1 memorials across the borough, Council commissioned professional researchers History Hub Ulster and WW1 Research Ireland to determine if there had been any omissions from the Second World War Memorial with a public call being made last October.

As it stands 40 names of the Fallen who were either born or resided in Ballymena district are eligible to be added to the existing memorial but before names are added and in order to be as comprehensive as possible, Mayor Councillor William McCaughey is asking the public once again to come forward with any other potential names

The Mayor said: “I am encouraging people to check that the name of their Fallen family member is either already on the War Memorial or on the list of verified additional names approved to be added to the Ballymena Second World War Memorial. We want to ensure, as best we can, that all local men and woman who made the ultimate sacrifice are remembered alongside those names already honoured.”

The eligibility criteria that Mid and East Antrim Borough Council has agreed to apply is that, primarily, the proposed person must be either born or had residency within the former Ballymena Urban and Rural District boundaries before enlistment. They must also have died in action or from wounds received within the time period 3 September 1939 to 31 December 1947. These are the official dates of the Second World War set by the Commonwealth War Graves Commission.

There are two options for submitting names to Council. To receive a proposal form and a copy of the existing missing names list please email: braidmuseum@midandeastantrim.gov.uk

For those with no, or limited, access to the internet, two drop in sessions at the Braid have been organised. These will take place on Monday 16 May from 10am – 4pm and Saturday 21 May from 10am – 3pm. Proposers are invited to call to the Braid where they will be able to complete a proposal form on informing reception staff of their arrival. The existing additional names list will also be available.

A member of museum staff will be available to assist, on request, with completing a form. For any enquiries please telephone Mid-Antrim Museum: 028 2563 5029 between Monday – Wednesday.

Any names proposed will require to be first verified against the set criteria prior to their recommendation for inclusion on the Memorial.

Work on adding the approved names is planned to commence by early autumn this year.