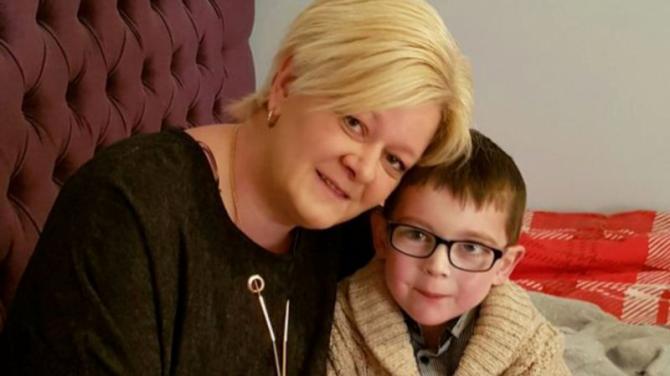 THE public is being urged to get the New Year off to a good start by helping to raise vital funds for a Ballymena based charity foundation.

The Mark Lynn CHD Foundation is a registered charity which supports children and young people with life-threatening chronic illnesses and their families.

The charity was set up by Donna and Geoff Lynn, who live in Ballykeel, in memory of their beloved son who sadly passed away at the age of eight.

Mark Lynn was born with congenital heart disease and endured many operations and hospital treatments throughout his life.

After Mark’s passing, the Lynn family decided to start a foundation in his memory with the aim of helping other families facing similar issues.

Last year their main campaign was based on Mark's love for the hit Proclaimers’ song ‘ 500 miles’ which helped inspire a superb fundraising effort.

During April and May, volunteers stepped out through rain and shine to clock up the sponsored miles to raise money for the foundation.

Donna said: “So far we have helped over 30 families and we are the only registered charity in Northern Ireland which covers so many different illnesses including congenital heart disease, cancer and cystic fibrosis.

“Not only do we provide financial support but we also help families with children in hospital by providing pyjamas and toiletries etc.

“Covid has been hard on all of us and we felt it was important to do something for the children. Thanks to money raised we were able to purchase trampolines and swimming pools for them during the summer so they could get outdoors and have fun.”

Donna added that during Christmas the charity organised a free dinner for 30 adults and 19 children.

As well as that they booked a two hour private session at the Fun Factory which was a big hit.

She said: “At Christmas time we wanted to help keep families together as much as possible because we know what it was like when we were in hospital with Mark.

“Having the Christmas dinner and time in the Fun Factory was great and everyone loved it. It is our plan to do something like that once a month where the families can get together and the kids can play.”

The foundation is keen to hear from anyone who wishes to help fundraise for the charity.

Donna said: “Since the foundation was set up the support we have received has been amazing. We are now a registered charity (charity number NIC108117) and fundraising is vital for us to continue doing what we do.

“We would love to hear from anyone who would be interested in fundraising whether its a sponsored walk or a marathon.

“With marathon season getting underway this year maybe any runners out there could consider running for the foundation.

“Or maybe people looking for a challenge and interested in giving something up for January such as chocolate could get sponsored. Any support would be very much appreciated.”

To find out more about the charity visit the Mark Lynn CHD Foundation facebook page or contact Donna on 07731932267.