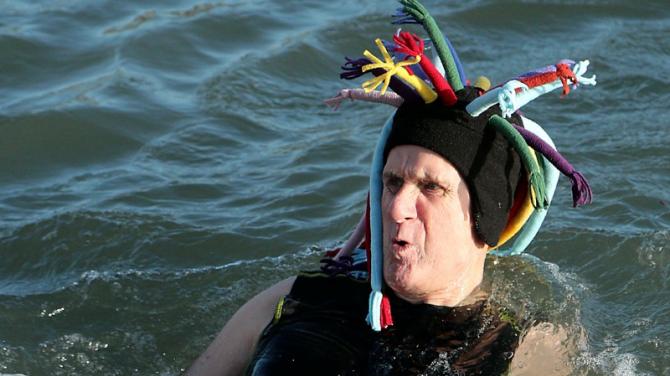 On a very mild New Year’s Day with the temperature at 13-14 degrees the conditions could not have been better for the return of the anual Spina Binfida swim event at Carnlough Harbour.

The big splash, traditionally supported by an enthusiastic crew from Ballymena, had to be called off last year due to the severity of the pandemic at that time but the smiles were back on faces on Saturday as hundreds gathered to watch the spectacle.

The Day started off with Geoff Bell, who was taking part in his 50th swim, being presented with a Silver Salver by young Grace McGuigan on behalf of the Association.

At 12noon on the dot Geoff, accompanied by stalwarts Bert Kernohan, Hugo Carlin and Angela McClements, led a total of 48 swimmers down the steps, which had been well prepared by Willie McClelland, into the water.

The swimmers were under the watchful eye of Leanne, Shannon, and Paul from the Larne Branch of the St Johns Ambulance.

Our thanks go to:

Ryan Hack and his team from the Mid and East Antrim council for erecting the safety barriers and hand sanitising station which allowed good viewing points for the public and safety protocols for the swimmers.

Darren and Sabrina Donnell and Family for the harbour collection which raise a magnificent sum of £270.00

Events Insurance Company in England who provided the Public Liability Insurance Cover required to allow the event to take place.

The swimmers were as follows:

William C McIlroy BEMChairperson can be contacted on 07718809314