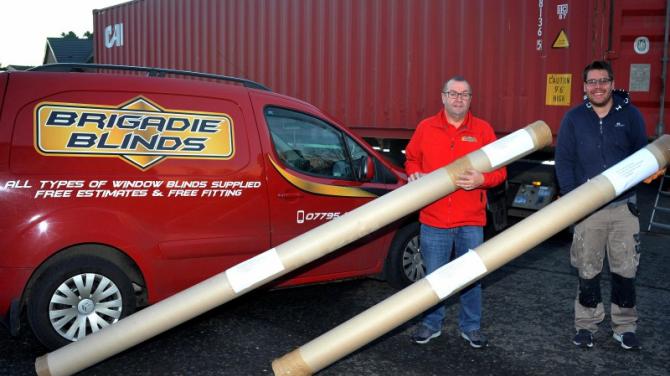 A BALLYMENA man has made a very generous donation of blinds to a missionary hospital in a remote area of Zambia.

Erroll Andrews established his own company, Brigadie Blinds, at the beginning of 2021 and the company has continued to successfully grow.

When asked by an old friend if we would consider supplying blinds to the hospital, Erroll didn't hesitate - and he even waived his fee!

Erroll told The Guardian: "I decided to go out on my own after working at McBurney's Transport for 20 years.

"I set up my blind business in January and it has been going really well. I've been kept busy and I enjoy the work.

"I was friendly with Thomas Wallace's son, Steven, and I happened to be chatting to Thomas and asked him how Steven was.

"He told me he was in Africa doing missionary work and he gave me his number so I could get in touch with him.

"I contacted Steven through Whatsapp. We had a catch up and he told me he working at Chitokoloki Mission Hospital in Zambia.

"It is in a very remote and isolated region and Steven helps with things like maintenance and driving to get supplies and materials.

"I thought the work Steven was doing was really fantastic and as we chatted I told him about my blind business.

"He said that the hospital was in need in of blinds and asked if I would consider supplying them.

"It was arranged that he would measure up the theatre and get me the sizes and we would settle on a price.

"Steven got back to me with sizes and I made the blinds up.

"I thought it was for such a worthy cause, I told Steven that there would be no charge for the blinds.

"Obviously, I wasn't able to go over and fit them so we had to arrange a way for the blinds to be transported to Zambia.

"Steven said a container full of donations and supplies was in Cullybackey ready to be shipped over so I packaged up the blinds, set them in the container and as far as I know they are currently on the way!"

Chitokoloki Mission has been in existence since 1914 when missionaries first settled there having travelled up the Zambezi River by barge.

The medical work at Chitokoloki has continued for over 60 years and comprises of a 180-bed hospital, in two different areas, for acute and ambulatory patients.

In addition there is also a section of the Mission known as the Colony which is a leprosarium with 110 dwellings for TB and leprosy patients, long-term accommodation for some ex-leprosy patients and older people who are more welfare cases with no one to care for them.

Since 1979 an emphasis has been placed on primary health care and the surrounding area within a 40 km radius is also served by three satellite clinics of which two of them are on the West-bank of the Zambezi River.

Over the last few years a major improvement has been added with the installation of solar panels, complete rewiring and a large battery bank which is capable of handling almost all the electrical demands of the hospital.

This has made a tremendous improvement as now both of the hospitals have 24-hour power and equipment that previously could run for just a short time can now be used all the time.

Deep bore hole wells have been drilled at both hospitals to provide clean water which is a tremendous improvement over the water that has previously used from the river.