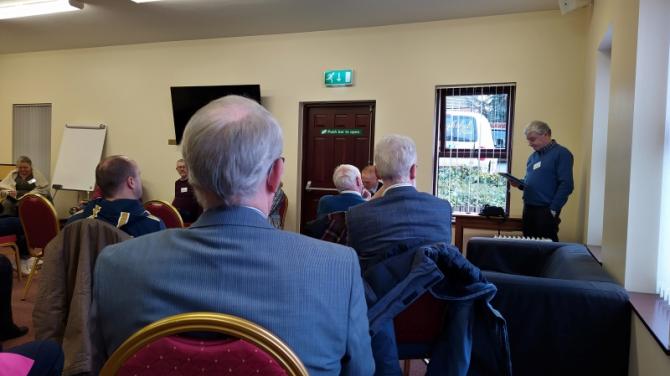 The seminars explore the themes introduced at PCI’s principle centenary event, ‘On these Steps’, which was held in September at Union Theological College in Belfast.

Entitled ‘Beyond these steps - reflecting on challenges and opportunities for the next 100 years’, the seminars are primarily aimed at the Presbyterian community in Ireland. Taken together, all four forums will provide a framework for an internal conversation that seeks to recognise the shared history that there is on the island of Ireland, while promoting a thoughtful and open dialogue within the denomination itself.

Rev Dr Tony Davidson, convener of PCI’s Peace and Reconciliation Panel, which is organising the seminars, said that he was looking forward to the series and that the Ballykeel seminar set a high standard. “From 1921, for 11 years, PCI’s Union Theological College was home to the Parliament of Northern Ireland before it moved to Stormont. A century on, we wanted to acknowledge the role that the College played in the momentous events of 100 years ago with a special event there,” he said.

“In holding ‘On these Steps’ in September, we had a broader aim beyond the commemorative, as we wanted to provide a space to reflect respectfully on how we deal with the legacy of our shared past and how it affects current relationships today. In doing so, it was also an opportunity to hear different perspectives and build relationships while looking in hope to a shared future.”

Dr Davidson continued, “During the event we heard the views of political representatives from across the UK, Ireland and locally on this significant anniversary. We also heard a wide-ranging and thought-provoking address that spoke to all traditions represented at the event from our Moderator, Dr Bruce, while Professor Ian McBride presented an historical perspective. As we embark on ‘Beyond these Steps’, we want to explore through these seminars the themes that came out of September’s event with the wider Irish Presbyterian community.”

The first seminar involved a dialogue with a panel of three ministers working in urban, working class, loyalist communities across Northern Ireland and Debbie Watters of the restorative justice programme, Alternatives NI. Rev Dr Martin McNeely, minister of Ballykeel Presbyterian Church, welcomed just over 30 key listeners within the denomination and other interested parties to his church to reflect on how the events of 100 years ago still play out in regard to political and community expression.

Dr Davidson explained that the remaining seminars would take place in the New Year.

“Throughout this process, we want to listen and reflect on what that may mean in the different contexts we will be exploring together, in the streets, houses, schools and estates like Ballykeel. As we reflect together, we seek to remember truthfully, therapeutically and helpfully in an attempt to use this anniversary constructively, so that in Jesus’ name, we may see the outline of a better future.”