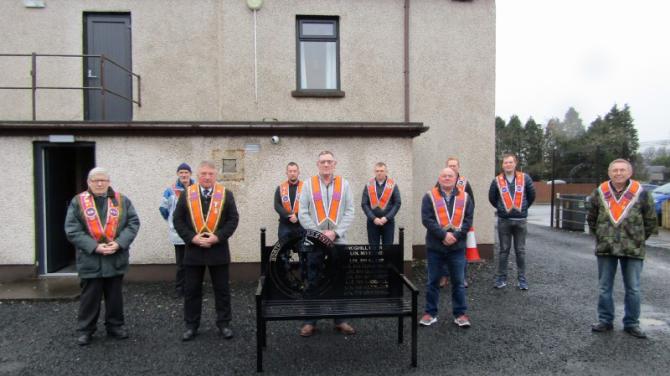 AT the end of another year where the Institution, District and private Lodge’s activities have all been to a greater or lesser extent curtailed by the pandemic, Ahoghill District LOL No. 12, brought the curtain down on 2021 by marking the centenary of Northern Ireland.

Recently members of the public and representatives of the seven private lodges, which make up Ahoghill District LOL No 12 (Glebe, Dunminning, Gloonan, Moyasset, Killyless, Ahoghill and Gracehill) were present for a ceremony to unveil a specially commissioned bench.

Designed to permanently commemorate Northern Ireland’s Centennial when displayed in the village it was produced by Mark Dunseath, of MD Welding Services, to a design incorporating the Grand Orange Lodge of Ireland’s official Centennial badge and including the details of the seven private lodges in the District.

With food supplied by Gloonan Cultural Society and accompanied by Ulster Scots music from Killyless Accordion Band and pipers the bench was unveiled by Worshipful District Master Bro. David Jackson, his Deputy Brother Jeff Kyle and its maker Mark Dunseath.

The District Lodge already has plans for a site for the bench where it will be able to be viewed, admired and used by residents of and visitors to the village.

It is hoped to have the bench permanently installed in the village early in the new year, a year which will also see the postponed Grand Lodger of Ireland Centennial parade in Belfast on May 28, DV and the Queen’s Platinum Jubilee celebrations the following weekend as well as the resumption of the traditional Triangle Twelfth demonstration in July which will see a return to Cullybackey for the Ahoghill and Portglenone brethren.

The District would like to take this opportunity to thank Mark for all his work and skill in producing the bench and to Mid and East Antrim Council and the Ulster Scots Agency for their financial support for the unveiling event.