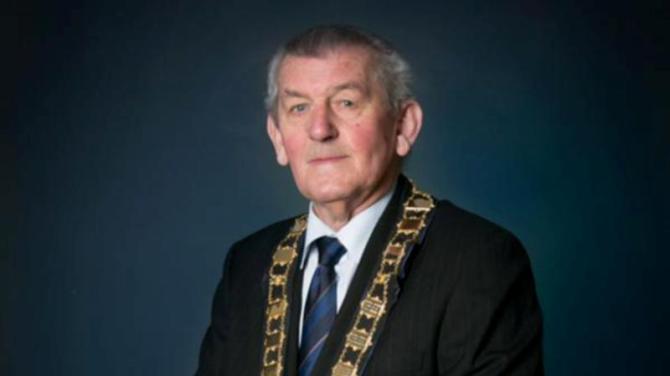 Mr George Arthur, a highly esteemed member of the Royal Black Institution has passed away.

Tributes have been paid to the Ballymena man who was a long serving and stalwart member of the Loyal orders.

The Guardian has received this tribute from the Royal Black Institution.

All who knew George Arthur will be well aware that his dedication, passion and love for the Royal Black Institution was second to none.

Though a member of the Orange Order it was the Royal Black Institution where George excelled throughout his many years of membership, having developed many lifelong friends during his travels to all corners of this island and further afield.

Advancing up through the Offices in the Committee, it was in 1967 when George accepted the Office of Deputy Master in the Preceptory continuing on to that of Worshipful Master in 1969.

In 1971 he stepped down and into the Office of Registrar where shortly thereafter in 1972 the task of arranging the Preceptory’s 100th Anniversary was one of his highlights while in office.

In 2022, RBP 285 will be marking its 150th Anniversary, something I’m sure George would have dearly loved to have been a part of.

His next advancements took him into the Ballymena Royal Black District Chapter and in 1982 he was installed in the Office of Deputy District Master moving on to the position of Worshipful District Master where he remained for three years.

While in office it was in 1989 at an Imperial Grand Chapter meeting in Gourock, Scotland that George was elevated into the position of Deputy Imperial Grand Master. He still held this office and assisted each of the Sovereign Grand Masters since in their duties.

In May 1994 in Templepatrick Orange Hall, George was elected into the position of County Grand Treasurer a position he held for 21 years.

George’s last elevation was in December 2014 when at the Imperial Grand Black Chapter meeting in the Molesworth Presbyterian Church Hall, Cookstown, he accepted the kind invitation to become an Assistant Sovereign Grand Master, holding that office for the next three years and having fulfilled the duties of that office on many occasions assisting The Most Right Worshipful Sir Knight Millar Farr Q.P.M. the then Sovereign Grand Master.

George was also a member of Co. Antrim Royal Black Choir since it was formed in 2018. He also had many years’ service as a Lecturer and using his knowledge he initiated and conferred degrees on many members throughout Co. Antrim and beyond.

The Royal Black Institution’s Imperial Officers and Sir Knights of County Antrim Grand Black Chapter, its Districts and Preceptories are in no doubt of the love and commitment George had for the Royal Black Institution and to his family we offer our heartfelt sympathies for their loss of a gentleman much loved and respected by so many and thank them for allowing us to have George in our lives and our memories.

‘Dearly loved husband of the late Joan, loving father of Margaret and Gary, father-in-law of Harry and Cylene a devoted grandfather and great grandfather.