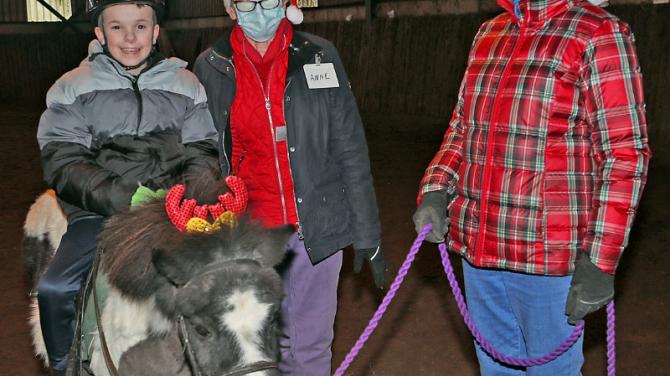 YOUNG Dylan Loughrey gave all at Mid Antrim Riding for the Disabled the Christmas present they will never forget!

For the 12-year-old overcame his fear of ponies and spent most of his session on ‘Geronimo’ doing circuits of the arena.

His friendship with the little Shetland pony, after at one stage being too frightened to actual stroke the animal, brought tears of joy to many of the Mid Antrim volunteers - and the bus driver!

And once in the saddle, with all fear gone, it was difficult to get the lad to dismount.

And he repeated several times, after overcoming his fears, - “It had to be done,” - to the delight of all within ear shot.

Last Thursday was a day Dylan, a pupil at Castle Tower School, in Ballymena, will never, ever want to forget.

Seconds after he had his picture taken, he asked the photographer, if he could get going again - such was his keen interest in enjoying life in the saddle.

And he ‘high-fived’ anyone within touching distance.

The beaming smile on his face said it all.

And he took great delight saying hello to everyone he knew - and believe me knew quite a few.

With the sound track of Silent Night playing away in the background Dylan’s day was complete as he rode into the sunset.

Mid Antrim Riding for the Disabled

Meanwhile, last Thursday a number of pupils from Castle Tower met up at Mid Antrim Riding for the Disabled Centre at Galgorm Parks facility off the Sand Road.

The Centre Volunteers helped the pupils into the saddles, and the fun began.

Normally at this time of year Santa would have been present and would have given out gifts to the youngsters.

Surprise, surprise ..... Covid has put paid to this, but the officials and Centre volunteers made sure there was still a lot of fun to be had, despite the absence of The Big Man.

One of their tasks was posting letters and Christmas cards, after collecting the mail while onboard their respective mounts.

The last couple of pony sessions at the Centre were their first since lockdown.

And all admitted just how much these were missed.

While Dylan was the centre of attention there were a few other notable events worthy of recording!

Two of the volunteers, with over 65 years service between them, were retiring.

They were Rosemary Moffett and Thirza McQuillan, 40 and 25 years respectively.

Rosemary was a former Riding for the Disabled Regional Instructor.

The Garvagh woman said she thoroughly enjoyed her time in this role.

And she praised the work of the Mid Antrim Riding for the Disabled at Galgorm Parks, speaking highly of all the volunteers who make the set-up run so smoothly.

Her colleague Thirza McQuillan, too, had much good to say about the local Riding for the Disabled set up.

She said it plays a vital part in the physical and mental well being of the youngsters who avail of it.

“It is very beneficial to the pupils. They love coming along, and we love having them,” said Thirza.

Chairman of the Mid Antrim Riding for the Disabled, Jean Clarke, thanked the duo for their most valuable input throughout the years, and wished them well in their retirement.