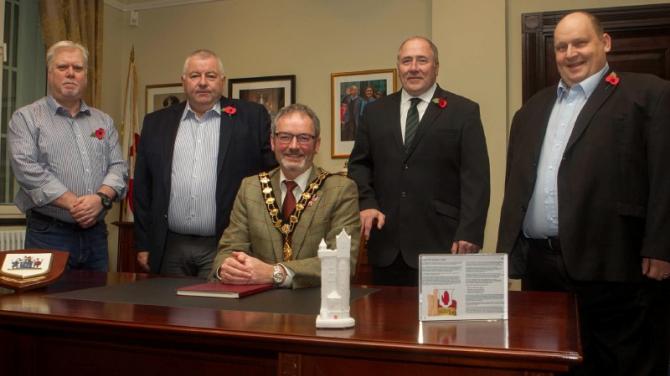 Mayor Cllr William McCaughey held a reception for elected members who were selected to represent the Borough Council at the Centenary Commemoration for the Ulster Tower.

The Tower, which is located at Thiepval in northern France, commemorates the men from Ulster who served and lost their lives in the First World War.

It was the first official memorial to be erected on the Western Front and was dedicated on the 19 November 1921.

The Ulster Tower stands close to the area where the 36th Ulster Division distinguished themselves, but at a great cost with an estimated 5,000 casualties on the first day alone – of whom 2,000 died.

The Bugles, Pipes and Drums of The Royal Irish Regiment, along with the regimental band, and the band of 2 Brigade in the Irish Defence Forces also took part.

Mr Givan said the sacrifice made by both of the two major traditions in Ireland in the First World War should always be remembered.

“It’s an honour for me to be here today on this historic occasion to mark 100 years of the Ulster Tower which memorialises the sacrifice that was made by the men of the 36th Ulster Division and remembers those who served from right across Ireland in the First World War,” Mr Givan said.

“The connections with the Ulster Division and the Irish Division is something that we always need to remember, where people stood side by side irrespective of their religion or indeed their identity, whether they were British or Irish, they shed blood together here in the trenches and stood in common cause for the freedoms that we enjoy today.”

Irish European Affairs Minister Thomas Byrne represented the Irish Government at the event and laid a wreath to remember all those from Ireland who died in the First World War.

He also visited the nearby town of Guillemont where he laid a wreath at the Celtic Cross First World War monument which stands in remembrance of the 16th Irish Division.

“This event is about a shared commemoration of all those from the island of Ireland who lost their lives in the First World War,” he said.

“It is about remembering the enormous and destructive impact of the war on that generation, and how it has shaped our history.

“We have come a long way indeed in ensuring that this chapter of our history is fully recognised and better understood as part of our shared heritage.”

Speaking after the ceremony, Sir Jeffrey said the Ulster Tower is “recognition of how significant the First World War was in the newly established Northern Ireland and the huge sacrifice from all those who left our shores to fight”.

It was inspired by Helen’s Tower in the Clandeboye Estate close to Bangor in Co Down, where many who served in the 36th Ulster Division had trained before being deployed to France.

“One hundred years on from the erection of the Ulster Tower and much has changed, both in Northern Ireland and around the globe. However, the service and sacrifice of all those who fought in the First World War continues to be remembered,” Sir Jeffrey said.

“There is also a growing recognition that those who fought came from different backgrounds, but were in the trenches with a united goal. The war truly is part of our shared history and it is fitting that so many have travelled from Northern Ireland to mark the centenary of the tower.”

Sir Jeffrey also paid tribute to the Somme Association for ensuring the Ulster Tower and Thiepval Wood are maintained to commemorate the past and keep those stories alive for future generations.