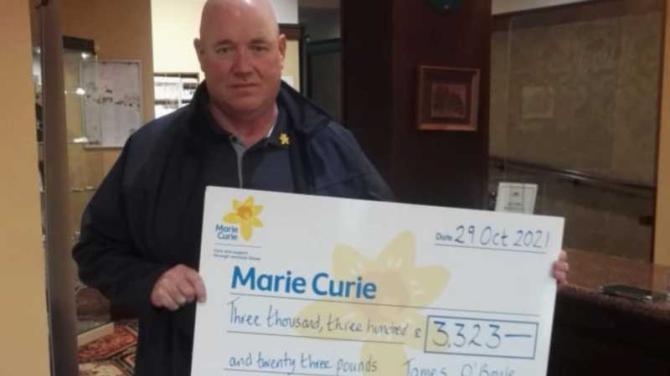 LOCAL man, James O’Boyle, has successfully raised almost £50,000 for a number of charities by stepping out at the Belfast Marathon for the past 10 years.

The 58 year old lorry driver, from Aghavary, Crosskeys, raised £3,233 for Marie Curie this year, bringing his overall fundraising total to £48,000.

James has participated in the Annual Belfast Marathon Walk for the last 10 years.

He initially set out to raise money and awareness for the NHS after finding himself admitted to hospital following a serious health condition.

When released, he decided to put his best foot forward at the Marathon as a way to say thank you to the NHS staff who cared for him during his hospital stay.

James told the Guardian: “I’ve completed the Belfast Marathon Walk for the past 10 years.

“It’s around eight or nine miles and any money raised goes straight to local causes and charities.

“I’ve raised money for around 10 charities, including Turning Point in Ballymena, the Macmillan Cancer Unit, Mencap, the Kidney Unit at Antrim Area Hospital as well as Causeway and City Hospital.

“This is my second time donating funds to Marie Curie and I usually try to pick a different charity each year.

“I found myself in hospital a decade ago and I needed to have an operation.

“The care I received from the staff was fantastic and I decided to complete the first Marathon Walk simply as a way of thanking them for helping me get back on my feet again.

“As each year went by, I kept going and tried to help a different charity along the way. For example, a neighbour inspired me to donate to Macmillan Cancer Care.

“I then chose a number of local charities so that all money raised goes to local causes to help local people.

“I have now acquired 10 medals for each completed Walk and raised thousands which will hopefully be of some help to these deserving charities.

As a trucker, James’ driving career has helped him get involved with a number of other fundraising activities.

He explained: “Around 21 years ago, I was in Irvinestown, Fermanagh, where I heard about an upcoming Truck Show.

“It didn’t go ahead but a group of about 20 drivers all met in a bar and raised around £250 for Marie Curie.

“A gentleman there said I should attend the Lady of the Lakes Festival, also in County Fermanagh.

“I drove down to the Festival and met up with Joe Mahon and George Gordon and the NI Truck Show grew from there.

“A group of ordinary lorry drivers came together for the Truck Show which has now become an annual event.

“Unfortunately, due to the Coronavirus pandemic the Truck Show hasn’t been allowed to operate the past couple of years.

“We were on course to top the £1million mark for monies raised for charities.

“We are hopeful that the Show will be up and running next year and we will reach this milestone.”

When asked how James felt about raising so much money for charity, he modestly responded: “I never really thought about it, to be honest!

“When I first set out 10 years ago, I never thought that years later, I would still be doing it, but I’m still going and I hope to take part in the next one.

“I do feel that I’ve achieved something, both for myself and the charities who hopefully will benefit from the funds.

“It’s a great feeling crossing that finishing line and a great accomplishment to have raised some money along the way.

“Sometimes people can view truck drivers in a bad light, but hopefully this will let people see a side to us that they don’t normally see.”