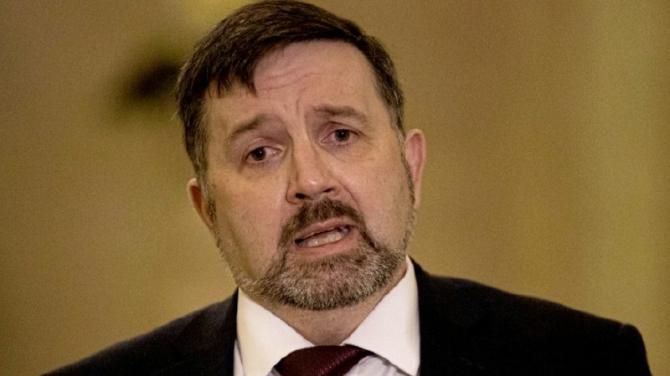 A 44-year-old man from County Down was charged with making threats to kill Health Minister Robin Swann, at Newtownards’ Magistrate’s Court today.

William Herbert Hawkes of Ardmillan Crescent in Newtownards is accused of posting messages on Twitter relating to the minister.

He is also accused of harassing Mr Swann and improper use of electronic communications.

The defendant appeared in court via videolink.

He confirmed that he understood the charges against him.

A police constable told the court that on November 15, 2021 Minister Swann reported that threatening messages had been posted on Twitter.

It was said that one message read: "I would advocate the killing of Northern Ireland's health minister."

The court heard that there were 10 similar messages.

Police officers seized a number of devices during a search of the defendant's property.

It was said that the defendant refused to reveal passwords to access the devices.

During a bail application, the defendant’s solicitor explained that his client was a carer for his elderly parents.

Defence counsel also questioned what technical evidence the police had linking the defendant to the messages.

The court was told that police believed that the tweets were sent from the accused's Twitter account, despite the absence of passwords to access the devices.

The Judge indicated that the defendant was given a Probation Order in the same court on November 4, for similar offences last year and commented that this was a "difficulty".

The Judge said: “Bail is refused because of the risk of further offences.

“This case may well go to the crown court, it is that serious.

“The fact the defendant withheld his passwords is a factor in that - if he withholds his passwords he will prolong his remand time."

The defendant will appear in court again on December 15, 2021.