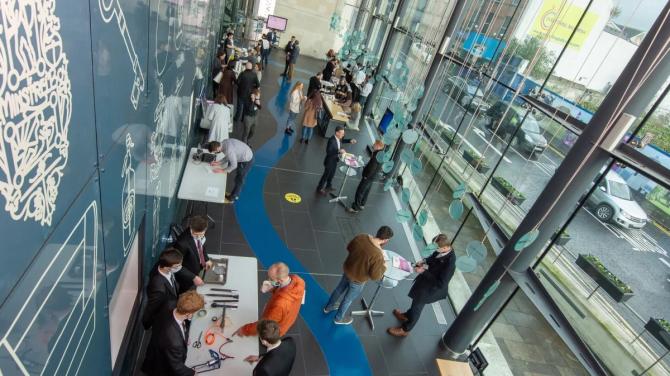 The Science School aims to inspire young people to become the next generation of scientists with an inspirational programme that mixes the best of STEAM (Science, Technology, Engineering, Arts and Maths) through a series of seminars, discussions and hands-on experiments.

Young people will be able to hear from industry and academic leaders who are at the forefront of STEAM subjects as well as from Professor Cox, who will deliver the keynote address.

The Science School will attract 400 pupils from across Northern Ireland with an evening panel session for Mid and East Antrim students and parents to find out about the STEAM Career Pathways available.

Local companies met with Science School organisers to find out more about the initiative and how they can help inspire the next generation of local talent and future workforce and raise the importance of STEAM activities with young people and their parents.

The project is now expanding nationally with the aim to make ‘the UK the best place to do science’.

“Mid and East Antrim Borough Council is delighted to be working with a range of local businesses, schools, universities and partner organisations to bring this exciting opportunity to the borough.

“In the year leading up to the Science Summer School, Council are running a series of schools careers activities including the Junior STEM Ambassador Programme in partnership with STEM NI.

“To date 64 young people have been supported to develop their personal and technical skills to deliver short science-based workshops in primary schools, junior years of secondary schools and youth organisations.

“The STEM Ambassadors and pupils will receive a British Science Association CREST Award for their involvement. I look forward to seeing the creativity and skills of our young people flourishing through this project.”

“There has never been a better time to be bringing the first Science School Northern Ireland hosted by Professor Cox to Ballymena!

“Science and the desire to learn more about how our world works, and about how we can use that information to improve the way we live our lives, has become extremely attractive and relevant as a subject area and a potential career path.

“The Science School initiative will activate the curiosities of the young people who take part and hopefully inspire them to great things.”

“I am delighted to be coming to Northern Ireland, and to Mid and East Antrim particularly, to meet the next generation of scientists.

“Science is about exploring, and the only way to uncover the secrets of the universe is to go and look!”