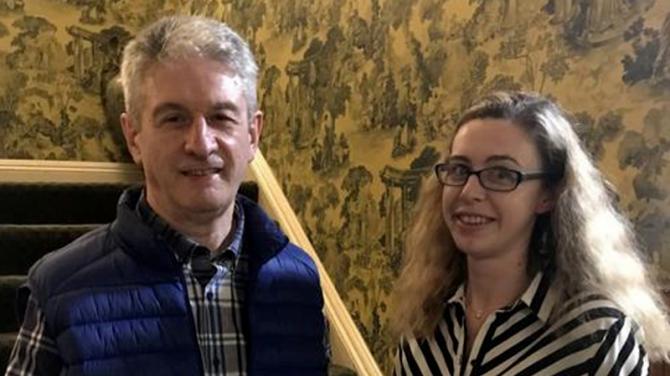 LOCAL historian, Felix McKillop, from Glenarm, has penned another history of the second of the Nine Glens of Antrim, titled ‘Glencloy and Carnlough.’

Some 25 years after publishing ‘Glencloy, a local history’, this new hardback, running to 208 pages, includes a spine of the previous history but has around 80 pages of new material and updates.

The book looks at history of the Glen from the earliest settlers and every important event in its history through to the present day.

The local schools, churches and numerous improvement committees are detailed, as are the old established industries of a German owned Chemical Company and an extensive limestone industry.

Readers might also be interested in other stories from the district, such as that of Sallie Osborne, a woman of some substance who lived in Glencloy, a confidante to a European Royal family, who mysteriously disappeared in 1935.

The Glens seafaring tradition and the perils of a life at sea are also examined. The book was launched recently in the Londonderry Arms Hotel, Carnlough on October 28. The hotel which is chronicled in the book has extremely interesting past having been built by the Marchioness of Londonderry in 1848 and later inherited by former Prime Minister, Winston Churchill.

Mr McKillop’s new publication is beautifully presented, largely in colour, with a great deal of detail which much have consumed many midnight hours for the author.

Mr McKillop has penned a number of other local histories, among which are, ‘The Valley of the Braid,’ ‘Along the Ravel and Cloughwater,’ History of Larne and East Antrim,’ 'Glenarm, a local history' and ‘Townlands, People and Traditions’ which have enjoyed much success.

The author’s latest local history will be a welcome addition to not only residents of Glencloy but to those who may only have a passing interest in that beautiful part of the country. The book retails at £20.00 and can be ordered from Mr McKillop at fmckillop@hotmail.com or telephone 028 28841407.

Those interested will be able to purchase a copy of the book in the Londonderry Arms Hotel, Carnlough on Thursday 11 November, between 7.30 – 9.30 pm, when copies of the new book and those of his previous publications will be available for sale.