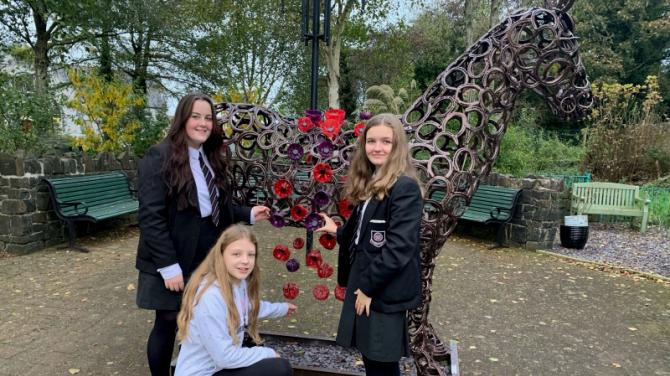 Cullybackey College Cadets have been remembering animals who were sent to war and who made the ultimate sacrifice.

After last year’s laying of poppy crosses at the graves to the fallen & inspired by the outdoor display at Larne Detachment Army Cadet Force (ACF), the cadets at Cullybackey College Detachment, decided to not only pay tribute to the many human lives lost in battle but also to the many animals who were sent to war.

As part of their ‘knowledge of military history’ lessons, the cadets learnt that during the Great War (WW1) there was a mass call up of horses from every farm and country estate in the local area and the rest of the UK.

Some men took their own horse with them to fight in battles such as the Somme and Passchendaele and the bond between them helped some to survive the war effort the most famous of them being Warrior.

Others were used to travel through rough ground and mud, which the vehicles of the time were unable to do or as messengers or pulling artillery, ambulances or supplies.

Dogs, cats, camels, canaries and pigeons where also involved in conflicts. A famous local messenger pigeon hatched in the village of Carnlough was Paddy the pigeon who won the PDSA Dickens Paddy (the animals Victoria Cross) and this year he too will be remembered in his hometown of Larne with a spectacular display at the Larne Detachment Army Cadet Force hut.

Cadet Sarah Kirk said: “After learning of the eight million horses, donkeys and mules who died in World War One and that the purple poppy is a symbol of remembrance for animals, we thought we could not let these animals be forgotten.”

These were then used for their traditional display to the loss of human lives in the window of Cullybackey Business Centre and then they moved on to create a poppy saddle made up of both red and purple poppies for the village’s ‘horse shoe’ horse to wear over the Remembrance period.

The final touches were put in place by Cadets Sarah Kirk, Alyssa Woods and Isla Gregg.

To all the lives of humans and animals lost in the various wars, we will remember them.