Council staff praised by Mayor for 'heroic actions' in the community 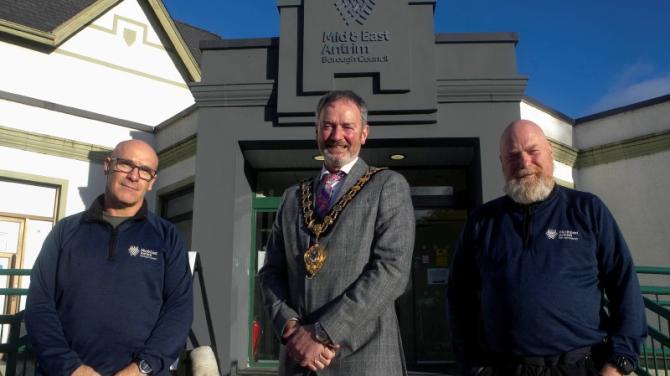 TTHE Mayor has praised the valiant efforts of Mid and East Antrim staff who responded to exceptional community needs over the last couple of weeks.

A reception is being held in the Braid today (9 November) where the Mayor will congratulate those who were involved in helping members of the community in their hour of need.

Four refuse staff are being praised after they helped a seriously injured man in a field off the Lisnamurrican Road.

The efforts of the men, while carrying out their daily duties for the Council, are believed to have saved the man’s life.

Two other staff from the Environmental Health Team in Ballymena have also been acknowledged by the Mayor for helping to save a man’s life who needed the use of a defibrillator.

Nigel Devine and Gary Gordon retrieved the equipment from Ardeevin Council buildings and came to the man’s aid at the Braidwater Retail Park, which resulted in the equipment restarting his heart.

Mayor of Mid and East Antrim, Councillor William McCaughey, said: “I am glad the members of the public who were helped by our staff are on the mend. Every second is precious when it comes to dealing with a cardiac arrest or serious injuries and our staff displayed their professionalism and first class training in dealing with both incidents. The defibrillators have certainly proved their worth.

“Both of these incidents are examples of our employees going above and beyond and I want to commend them for their heroic actions.”

If your community, voluntary or sporting organisation would like to know more about funding for defibrillators, visit: www.midandeastantrim .gov.uk/grants