'Homecoming' ordination for Stephen at Rasharkin 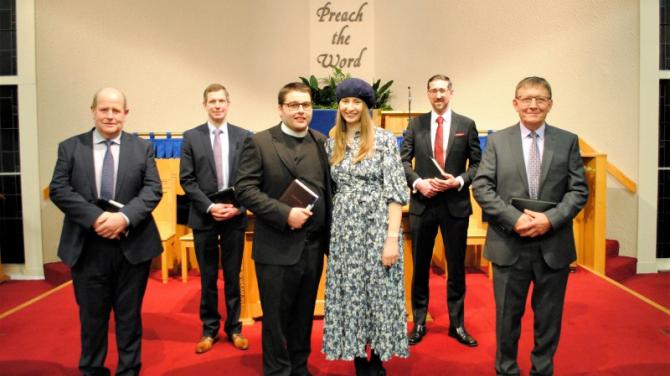 Last Wednesday was a significant date in the history of Rasharkin Free Presbyterian Church.

Mr Stephen Nelson was ordained to the Christian ministry and installed as minister of the congregation.

This year is the congregation’s 70th anniversary and Mr Nelson is the 7th minister. He succeeds the Rev Kevin McLeod who pastored in Rasharkin from 2002-2020.

Mr Nelson’s installation is something of a ‘homecoming’.

Stephen grew up in the Rasharkin congregation where his father previously served as minister. Rev Timothy Nelson preached in the village from 1988 to 2000 before moving to County Armagh.

The ‘son of the manse’, Stephen spent time in Counties Armagh, Tyrone and Down.

In later years he lived, studied, and worked in the Belfast area. He comes to Rasharkin after completing training at the Whitefield College of the Bible. He and his wife Alana are looking forward to serving the Lord in rural county Antrim.

Their prayer is that many would believe on the Lord Jesus Christ and be saved.