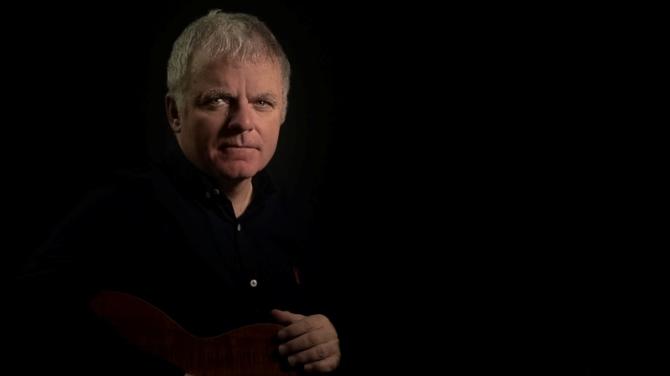 ANTHONY McQuillan’s new album certainly struck the right chord with one Ballymena Guardian reader and he felt compelled to write a detailed review for our paper.

Anthony McQuillan has just released a new song, 'Jessie Just Might': a song from his soon to be released album, 'My Reflection'.

And, that is exactly what the song is, a bright reflection of this troubadour's roots.

'Jessie Just Might' could have settled neatly into a South Bound Train set played in the Bridge all those years ago.

And yet, the song still manages to be of today, with a freshness and verve that deserves any daytime radio play.

The nostalgia may be hard to ignore, but I feel there are those who will very much welcome that.

CREAM OF THE CROP

For the new album, and so with 'Jessie Just Might', Anthony has enlisted the cream of session men.

Except for one bass rundown which appears at 1.29 - appears and is gone.

Throughout, Rod McVey never interferes or commands, but allows the guitar the space for neat bends and fills.

Leaving the station almost as a click track until Culbertson's guitar notetonaly slides in to meet the underlying piano.

This sets the song up with a Jackson Browne feel.

The lyrics start shunting along Jessie's compromising life, pained with the stops and starts of just getting back.

Lyrically, the economy of one-line statements, which are so factually descriptive, begin to carry us along with Jessie.

'A moment of reflection in barroom heels'.

This is clever writing. Dylan mastered this with 'A Simple Twist of Fate'.

With Anthony, using simple rhyming couplets, he shows how uncomplicated Jessie is, making decisions which suit at the time.

For better or worse. I know Anthony believes 'Every word has to earn its place' , and there are no wasters here.

This allows compact completeness and pushes the rhythm along, as does the absence of a chorus.

Each verse is relieved by the clever hook, which neatly closes each picture.

This is the line you will find yourself singing in the car!

Of course, nothing is perfect.

And here, with each listen I still wait for the song to take off, to rise to the expected crescendo.

The vocals almost promise and encourage that anticipation.

Confidently, carrying the clear, and sometimes too precise diction, vocals himself.

No breath of harmonies or backing in sight!

This ensures the train stays on the track; and delivers a fine song.

Yet I would love to hear a full-blown West Coast version. Harmonies and horns! Then, we would have a great song.

Giving it all that it deserves, what Anthony McQuillan's loyal followers deserve.

An apparent need to stay in the shadows. A rebellion against pop music. Yea, remain a cult, that's the way to do it.

Anthony once assured me: "Music is too important".

As Nick Lowe asked: "What's so funny about peace, love and understanding?"

Well" What's the problem with popularity?

So, 'Jessie Just Might' be the song which Anthony McQuillan, reluctantly, may have to accept as one of his finest for popular listening.