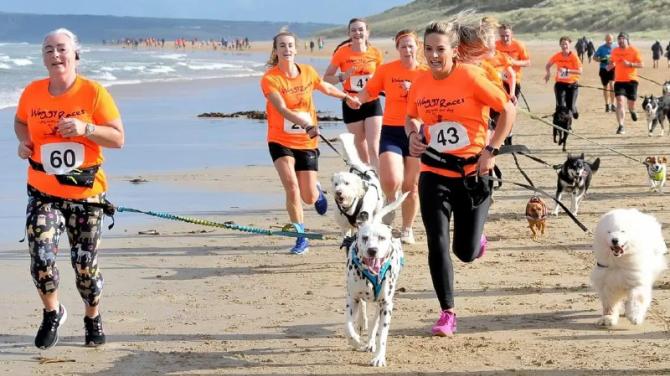 The annual event took place at East Strand and Kelly and Charlie finished 24th out of an entry of 142 in the 5k race.

“I have ran with Charlie’s mother Daisy in previous Waggy Races events, but the recent one with Charlie was our second,” outlined Kelly, who is also a member of Ballymena Runners Club.

“There were 30 dogs per wave and we were in the second wave 5 minutes behind wave 1. Charlie ran like the wind at 6 minute mile pace until we caught up.”

Kelly encourages other dog owners to get involved in the next Waggy Races!

“I urge others to give it a try. It is great fun. They also have a Walkers event. Charlie is lead reactive to other big dogs but once he's running he just ignores the other dogs and really goes for it.”

Northern Ireland-based Waggy Races organise cross country fun runs for you to enter with your dog or dogs.

The events are on mixed terrain, off-road 5km fun runs at beautiful locations.

They usually organise two formal race events each year, in the Spring and Autumn.

Between races they organise various hikes and training sessions.

​Waggy Races gets participants of all standards ranging from competitive runners to leisurely walkers.

The sport of cross country running with dogs (canicross) originated in Eastern Europe as a means of keeping sled dogs fit outside of the snowy season.

It spread to some parts of Europe but had never reached Northern Ireland.... until Waggy Races was born in 2014.

“He is my best running partner,” said Kelly.