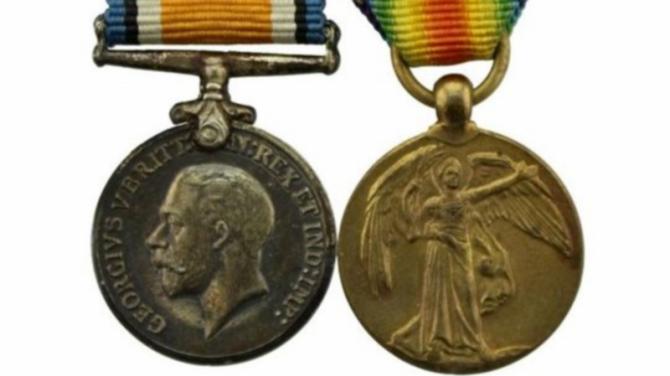 Councillors have deferred a decision on the return of war service medals from Mid-Antrim Museum in Ballymena.

The medals were donated in 2001 and have been in the ownership of the council’s museums collection since.

They belonged to the donor’s father who served in both World War I and World War II.

The items have been on display as part of the NI100 ‘Looking Back to Look Forward’ museum exhibition”.

It is the only set in the museum which documents a war record for the same person in both World Wars.

A request for the return of the items was first made to Mid and East Antrim Borough Council in June.

Speaking at a meeting of the council’s Borough Growth Committee , DUP Alderman Billy Ashe MBE said: “I’m still not happy with this item. This is somebody who has passed away and wishes we would have these. ”

He said that he had asked an officer to telephone to determine the family’s wishes.

Council officer Ross Hickey said: “I understand the request is made on behalf of the entire family. It is the entire family’s wishes that the items are returned despite the original request for the items to be held by the council’s museum.”

Ald Ashe replied: “I would like to see something in writing from the whole family.”

Alliance Cllr Robert Logan said: “I am in agreement with Ald Ashe.”

He was told that the request is on behalf of the family and there is “clarity on that”.

Coast Road Alliance councillor Ald Gerardine Mulvenna said: “This is quite an unusual situation and a sensitive one.”

She added that she would be content to recommend an option to approve the family’s request for the items to be permanently returned to them.

Ballymena councillor Ald Audrey Wales MBE pointed out that the donor wanted the medals to “be left as part of the history of the area, not to be given back”.

The officer said she would bring back an official letter.

Bannside TUV Cllr Timothy Gaston suggested that the local authority “get the corporate solicitor’s thoughts on that”.

DUP Cllr Peter Johnston asked if a national museum would be obliged to return an item at the request of the next of kin. He was advised that when items are donated, legally, ownership transfers to the council and to return them would be “a gesture of goodwill”.

“There is no obligation on council to return them. It is the same with national museums,” the officer noted.

Ald Mulvenna proceeded to withdraw her proposal until written confirmation is received from the family.

Ulster Unionist Cllr Robin Stewart said he does not object to returning the medals. “The majority are not against it. We just want to make sure we get it right,” he stated.

In response to a suggestion by Coast Road DUP Cllr Andrew Clarke of a “long-term loan” to the family, he was advised “that option had been tried”.

“They are adamant they would like them fully back and may loan them to us,” an officer stated.

The councillors were told that the officers would get the letter and look at the legalities before bringing the matter back to the next meeting of the Borough Growth Committee.