Counting their blessings in Cullybackey! 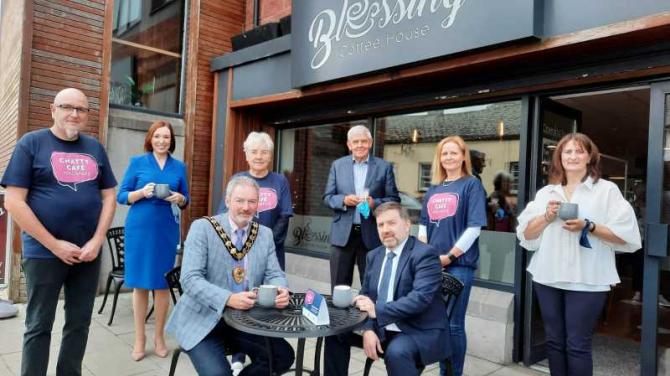 The borough’s first Chatty Café has been officially opened at Blessings Café in Cullybackey.

The idea of a Chatty Café is to encourage venues to designate a table and make it available as a ‘chatty table’ where customers can sit if they are happy to talk to other customers.

The scheme, being rolled out by Mid and East Antrim Loneliness Network, part funded by MEA Council, aims to tackle loneliness and reduce isolation by creating opportunities to talk and interact.

It comes off the success of the Chatty Benches scheme which has seen bright yellow benches in public spaces create an opportunity for conversation in the outdoors.

The café was launched by Health Minister Robin Swann and Mayor of Mid and East Antrim, Cllr William McCaughey.

Health Minister, Robin Swann, said: “One in three people in Northern Ireland are likely to experience feelings of loneliness in their lifetime. Throughout this difficult year of lockdowns, isolation and restrictions on our social activities, human contact has been limited which has impacted upon our mental health.”

Mayor of Mid and East Antrim, Cllr William McCaughey added: “The challenges the pandemic has created in terms of creating loneliness in communities is something that the Mid and East Antrim Loneliness Network aims to tackle. I am delighted to attend the launch of the first Chatty Café in Cullybackey and look forward to seeing many more established across the borough.”

Mid and East Antrim Loneliness Network launched in December 2019 and is made up of a range of community voluntary and statutory organisations who all work together to prevent and address loneliness.

Marjorie Hawkins is the Network’s Chairperson: “I have seen time and time again how detrimental loneliness can be on a person and how simply having a conversation can make someone go from feeling invisible to visible. The Chatty Café in Cullybackey will change the culture of talking to people in cafes, combat loneliness and open up people’s lives.

Yvonne Carson, Thematic Lead for Loneliness within the Northern Health and Social Care Trust added: “It’s been fantastic to see local people come together in Cullybackey to make this initiative happen. We understand how vital human interaction and conversation is, and we’re so pleased that this scheme has the potential to make such a difference to people’s lives.”