Bandsmen stepped out in style for 'Wee Jake' 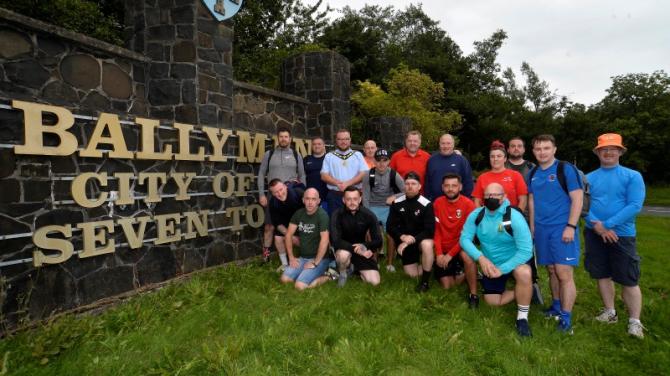 THEY may well be used to stepping out on parade but a group of local bandsmen tackled a truly mega march on Saturday to raise funds for a cause close to their hearts.

Pictured are - Mid and East Antrim Deputy Mayor Matthew Armstrong seen with members of Gertrude Star, Ballykeel Loyal sons of Ulster and Pride of the Maine after they walked from the Westbourne Glentoran Social Club in East Belfast to the Protestant hall in Ballymena to raise funds for Jake Oliver from Ballykeel. Organiser Andy Larmour would like to thank everyone who helped out in any way. GB3747D21

Members of Belfast based Gertrude Star were joined by members of Ballykeel Loyal Sons of Ulster and Pride of the Maine on a gruelling trek from the heart of East Belfast to the centre of Ballymena.

The sponsored walk was in aid of young Ballykeel boy Jake Oliver who suffers from blood cancer.

Among the marchers was local councillor, Rodney Quigley who said that the joint effort by the band members was to be praised.

“I couldn’t make the entire walk because of prior engagements but I was proud to be there at the 6.30am start in East Belfast with my local band colleagues.

“Jake has relations in the ranks of Gertude Star Flute Band and it was their idea to do the walk to Ballymena.

“I know their fund raising page has received a lot of donations from local bands and its great to see such unity on the marching band front,” he said.

One of the walk’s organisers, Gertrude Star’s Andrew Larmour said the walk to Balymena was one of the proudest days of his life.

“Walking with my Gertrude brothers and making three new friends for life in GeorgeBarr , Lyle Murray and Rodney Quigley was an honour.

“It is great to know that we have helped Jake and his mum Karen Oliver through this event.”

Karen Oliver and Jake were there to welcome the intrepid walkers to Ballymena and she said she was overwhelmed by the generosity shown.

She said: “Tonight Jake,Emelia and I met up with everyone walking at Queen Street and finished the walk with them!

“We cannot thank you all enough! Jake was a little out of sorts due to increasing his Saturday chemotherapy dosage but he just stayed in my arms and took it all in this evening.

“ I wish I could thank absolutely every one in person for joining the walk and giving donations you have all blown us away by your generosity.”