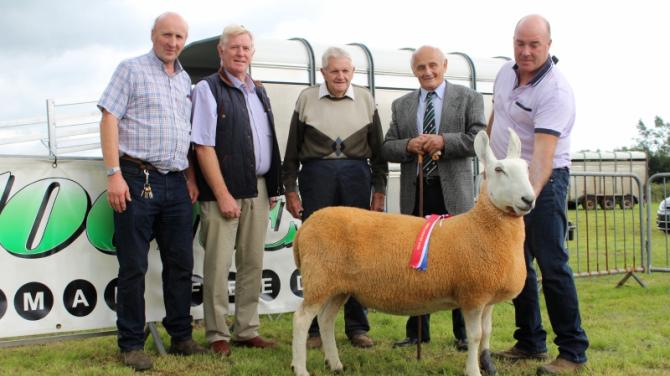 The Ulster Ram Breeders’ Association Border Leicester members held a Border Leicester Show on Saturday 14th August instead of running a virtual show which proved to be a resounding success, with many breeders showing while others spectated.

Chairman Robert Dick, “Beechgrove” Ahoghill hosted the event with Tom Nelson,” Kilphin”, Ballantrae judging, who went on to say “I had a tremendous day where the stock was understanding and the sun shone.”

2nd Reserve Champion went to a Ram Lamb from William Semple “Gortnagross” Dungiven sired by the 2nd placed shearling on the day which was bought in Lanark last year as a ram lamb from Jimmy Douglas registered Clola Spectre, Dam was purchased privately from Tom Nelson, Kilphin.

Results on the day:

The Society of Border Leicester Sheep Breeders held their 125th Anniversary this year on 7th August in Carlisle where the 125th Anniversary Gimmer Draw was won by Harold Dickey, Ballymena receiving the Knockglass Gimmer by Alticane Celebrity out of a Home bred ewe by Eildon Epic and another U.R.B.A. member Coote Geelan won a trip to the Isle of Arran. Congratulations to both members and we hope they enjoy their prizes.

The U.R.B.A. Border Leicester Show and Sale will take place this year in Ballymena Livestock Market on the Monday 27th September more details will follow.